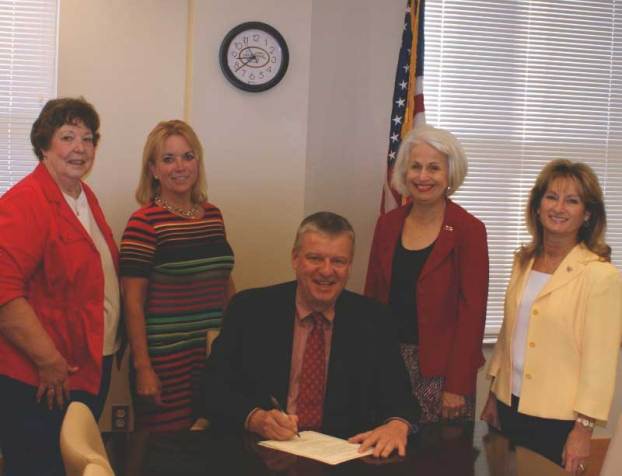 Mayor David Whitus signs a proclamation declaring Sept. 17-23 as Constitution Week. At 4 p.m. on Thursday everyone is encouraged to ring a bell to celebrate this day in our history. Pictured, from left, are Kay Whitfield, Constitution Week chairman, Elizabeth Schuler, Mayor Whitus, Regent Lynne Pridgen and Margaret Atkins.

September 17 begins the national celebration of Constitution Week, a weeklong commemoration of America’s most important document

In 1955, the Daughters  of the American Revolution petitioned Congress to set aside September 17-23 annually to be dedicated for the observance of Constitution Week.  The resolution was later adopted by U.S. Congress and signed into Public Law #915 on August 2, 1956 by President Dwight D. Eisenhower.

The aims of the celebration are to emphasize citizens’ responsibilities for protecting and defending the Constitution, preserving it for posterity, informing the people that the Constitution is the basis for America’s great heritage and the foundation of our way of life, and encouraging the study of the historical events which led to the framing of the constitution in September 1787.

“Constitution Week is the perfect opportunity to read and study this great document which is the safeguard of our American liberties,” DAR President General Lynn Forney Young said.  “We encourage all citizens across the country to take time this week to reflect on our heritage of freedom and come together to Celebrate America!”

The DAR has long promoted patriotism through commemorative celebration, memorials, scholarships and activities for children, and programs for new immigrants.  For more information about DAR and its programs visit www.dar.org.  To learn about becoming a member locally, contact Kathryn Jenkins, Judith Randolph-Longwood Chapter Membership chairman at (434) 392-3535 or Lynne Pridgen, regent of the Judith Randolph-Longwood Chapter at (434) 392-6556.