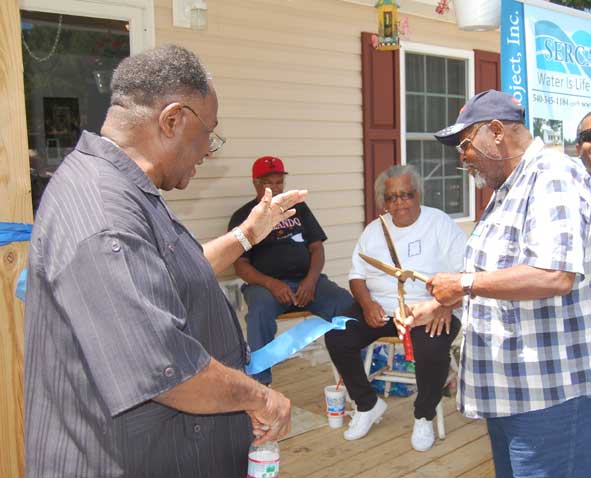 Don Chambers, right, cuts the ribbon to his new home recently built by the Southeast Rural Community Assistance Project with help from his brother Edgar. (Photo By Jordan Miles)

As Don Chambers sat quietly in a wooden chair in a corner of his new home, he watched photo after photo on a slideshow as his old, dilapidated trailer was slowly replaced with a stick-built home, equipped with clean water, a solid foundation and a sturdy roof.

They were amenities he wasn’t used to.

His old home, Chambers concedes, was in “terrible shape” before the Southeast Rural Community Assistance Project, or SERCAP, came into his life. His floors weren’t level and were rotten. The roof leaked. The septic system had failed.

“Lord, have mercy,” Chambers responded when asked if he was thankful for his new home, acknowledging his gratitude.

SERCAP, along with Chamber’s family and friends, dedicated his new home on Dixie Hill Road outside of Buckingham Court House recently.

“[It’s] quite a bit of difference,” SERCAP’s Randolph “Randy” Phillips said of the new home. “It had a failed septic system; that’s why he qualified for the IPR [Indoor Plumbing and Rehabilitation] project … . He was in need of a home.”

The home accommodates Chambers’ mobility issues and is energy-efficient, he said.

Chambers said it was the second good feeling he’s ever had: “The first one was when my mother and father got a new home built.”

Kenneth Rodgers, a SERCAP housing manager, said it gives him a great feeling when helping those less fortunate and in need of adequate housing. “It’s almost like a ministry in the fact that you’re helping someone get their home repaired, renovated in good condition. We look at this as a community development effort,” he said.

“The biggest thing is helping out the homeowners,” Rodgers added. “When they need the septic system that’s $20,000, that’s a difficult thing to do if you only have $2,000 a month coming in. …”

SERCAP’s IPR program supports those who do not have indoor plumbing and those with incomplete plumbing due to a failing septic system. “The program assists not only with sewer and water needs, but also provides for the complete repair of the home to bring it to housing quality standards,” noted a SERCAP informational document. Certain qualifications must be met to be part of the program.

SERCAP has built more than 20 homes in Buckingham, according to Rodgers and Phillips.

“You don’t know how great that makes me feel to come into a new home,” Chambers said, sitting in his home as his family and friends waited for him to join them outside for the ribbon-cutting ceremony.

The ceremony was followed by a prayer by his brother, Edgar, who thanked God for Don’s blessings.

There’s a collection of books on a shelf in the community room at Parkview Gardens. See a book, take it... read more