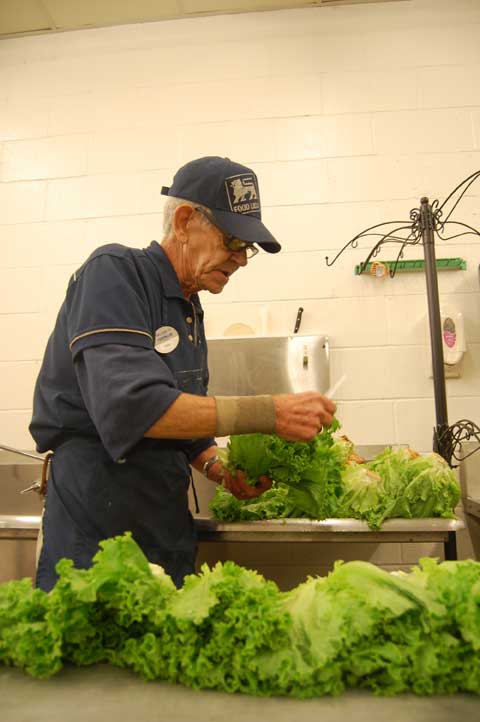 Andersonville native Charles Horne celebrated a major milestone in his life recently by simply putting on his blue Food Lion cap, shirt and name tag, coming into work, clocking in and making his way to the produce section.

It’s a routine that Horne has followed in his 50 years of working in the grocery business in Buckingham County. Aug. 1 was the exact date marking the 69-year-old’s five decades of putting up produce, cutting meat and greeting customers along the way.

Horne took his first grocery store job in 1959 when he was only 13 years old at Hambone Agee’s store on Route 60 just east of Buckingham Court House. To get the job, Horne had to get permission to work from the school division because of his young age.

“Basically it was stocking shelves,

helping people find stuff, work gas pumps, whatever,” Horne said of his first job while leaning on a stainless steel sink surrounded by lettuce and other vegetables waiting to be cleaned, cut and put up for purchase. Horne would work with Agee for three years, making only $2 a week. “That was for six days,” he laughed.

The slender man, who’s lived in the same house since he was 2 years old, then began working at Pete Shumaker’s meat market on U.S. Route 15 south of Sprouse’s Corner. Horne learned how to cut meat there, where he labored for three years.

Cutting vegetables as he spoke, he explained that he then moved to Nicholas’ Supermarket where he would remain for the next 30 years.

“I started off just doing groceries, this, that and the other,” he explained of his duties there. “And ended up, 28 of those years I believe it was, I worked in the produce department.”

Nick’s, as the supermarket was commonly referred to, was his favorite place to work. “I had never worked a job in my life [where] I was treated that well while I was there,” he said.

When Horne was dealing with health issues, Nick’s paid him for the two months that he was out sick. That meant a lot to him, Horne said.

After Nick’s closed, Horne made his way to his current job at Food Lion, where he was hired the day after he submitted his application.  He’s been on the job there for 14 years.

“I like produce better than I do any of it,” Horne said, adding that he’d worked in all grocery departments through his tenure. He’s even operated cash registers, though it was many years ago at Nick’s.

“Amen, amen,” he emphatically responded when asked if the friendships he’d made over the years were valuable to him. “Very few people don’t come in here and call me by name,” he said, smiling.

Horne takes pride in the fact that he stops and speaks to customers when they come through.

When asked about the biggest changes he’s seen in the industry over the past 50 years, he exclaimed, “Damn computers!”

The favorite part of his 50 years in the profession has been the people, he said. “The people. Yes, the people. The people that I get a chance to talk to.”

Horne said he’s got no plans on retiring anytime soon. That decision’s not up to him, he said.

“When the good Lord makes me,” Horne said of his future.