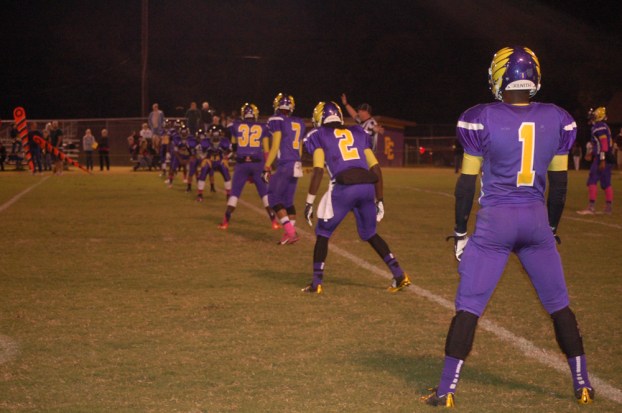 PECHS lines up to start the game. (Photo by Hannah Davis)

Benefit games are used as a way for teams to help raise money for their athletic departments as the schools involved charge a gate fee and divide that among the participants as well as the VHSL.

PECHS varsity football coach James Ford said that he saw some good things and some other things that need to be worked out prior to the start of the season at the recent scrimmage. He said that while the Eagles were outscored by both Chatham and Martinsville, they were without their starting tailback, Delquan Bigelow.

Even shorthanded, Prince Edward was able to move the ball up and down the field, but had trouble getting into the end zone and finishing off drives during the scrimmage.

“We allowed a short field too many times to both teams with poor special teams play and turnovers, which put our defense in bad spots. But all in all, those mistakes are correctable and we will need to be ready, because next week it’s for real,” Ford said.

The Eagles will open their season this Friday night at home as they host Windsor at 7 pm.