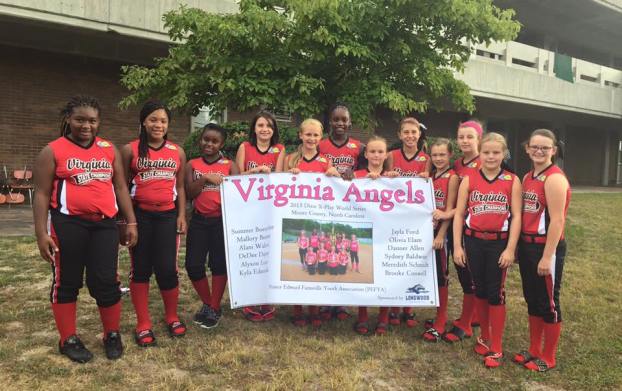 The Prince Edward-Farmville Youth Association (PEFYA) Angels made a valiant run through the loser’s bracket before being eliminated with a 6-0 loss to South Carolina on Monday afternoon. It was the first time that a PEFYA softball team had advanced to the World Series.

The local team had a tough opening game as they fell by a 7-1 score against Mississippi but quickly rebounded with a 2-0 win over Florida in the second game of the tournament behind a shutout pitching performance from Alyson Lucas. On Sunday night PEFYA would take on Tennessee in another elimination game and the group came through with strong pitching, defense and timely hitting to get a 5-0 win as they continued to make noise in the World Series.

The team saw their run in the World Series come to an end on Monday afternoon as its fell to South Carolina.

South Carolina would get off to an early lead as a single and an error allowed one run to score in the top of the first inning before pitcher Kyla Edmonds was able to induce a pop up to Danner Allen to end the threat and keep the score at 1-0.

In the bottom half of the inning, Lucas singled to reach base, but she was unable to score and South Carolina held on to its lead.

The second inning saw Edmonds get strong defensive play from shortstop Olivia Elam, who recorded a pair of put-outs. Allen singled to start the bottom half of the inning for PEFYA, but she was stranded.

In the third inning three walks brought in the second run of the game for South Carolina. Allen came in to pitch with bases loaded and she limited the damage by inducing a fly ball to Brooke Conwell and recording a strikeout to end the threat. PEFYA would go down in order during the bottom of the third inning as the score remained 2-0.

In the top of the fourth, Allen handled all three outs as she fielded a pair of comebackers and struck out a batter. Lucas singled with two outs in the bottom half of the inning, but the rally attempt would end there and PEFYA continued to trail 2-0.

South Carolina had a big fifth inning capped off by a three-run home run that gave it a 6-0 lead as PEFYA came up for its final bat.

They didn’t get anyone on base and ended their tournament run after posting a 2-2 record in the World Series.