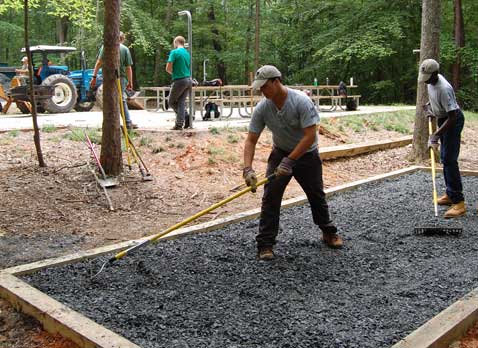 Aaron Sellers, right, of Norfolk, and Anthony Lucas, of Woodbridge, spread gravel at one of the new campsites. (Photo by Jordan Miles)

Ten young men from all ends of the state recently helped to complete a years-long project at Bear Creek Lake State Park: building an area dedicated to group campsites.

The teenagers, participating in Virginia’s Youth Conservation Corps (YCC), spent a week-and-a-half at the state park in Cumberland, hammering, digging, sawing and laboring to make the dream a reality for park staff.

“The YCC is mirrored from the CCC [Civilian Conservation Corps] program,” said Lee Dowdy, the park’s chief ranger, while watching the young men work. He said education, calisthenics and work are parts of the YCC’s programming. “It gives the kids a sense of accomplishment just like it did with the young men back in the 1930s.”

Kinner Ingram, from Roanoke, was one of three adult crew leaders on site supervising the participants. She said that the YCC is a “youth developmental program where we live in a park for three weeks with the kids and they do work around the park, you know, whatever they really need us to do.”

Kinner, who’s been involved in the program for several years, said the YCC consists of high school students between ages 14 and 17. While more than 1,000 applied this year to the voluntary program, he said, only 200 were admitted. The program pays participants $500 each upon completion.

Crew members work and live as a team, notes the Virginia State Parks website regarding the YCC.

Dowdy called the program a good motivator for the energetic teenagers. He likened the program to the Works Progress Administration, which, along with the CCC, helped build the state park.