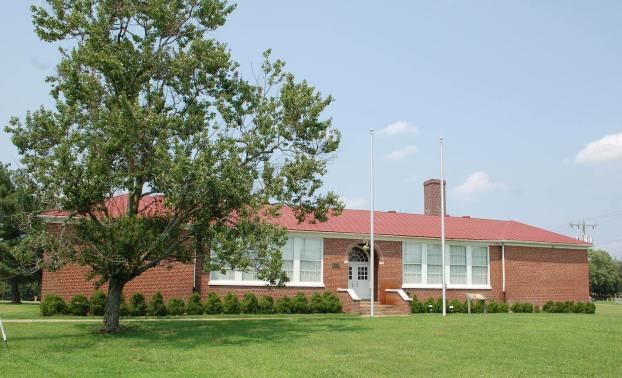 The Moton Museum is located at the intersection of Main Street and Griffin Boulevard in Farmville. (Photo by Rob Chapman)

The building is a 21st-century model of one of the three “tar paper shacks” constructed outside the all-black Moton High School in 1948 due to overcrowding. The poorly constructed classrooms prompted Moton students to go on strike on April 23, 1951. Moton students and families comprised three-fourths of the plaintiffs in Brown v. Board of Education, the landmark 1954 U.S. Supreme Court decision that declared segregated public education unconstitutional.

The new facility provides additional educational, programming and meeting space for community members and museum visitors. The new tarpaper building is constructed on the same footprint as the original and is identical in size and outward appearance on three sides. The fourth side features a mural by Hamilton Glass. The project also included construction of a bus pull-off along Griffin Boulevard and a new parking lot.

The Virginia Tobacco Region Revitalization Commission and the Virginia Department of Transportation Enhancement Program funded the project. The Commonwealth Regional Council and the Town of Farmville administered the grants. WileyIWilson served as the architectural and engineering firm for the project, and R.F. Howerton, Inc. was the project contractor.

The museum is located at the intersection of Main Street and Griffin Boulevard in Farmville.