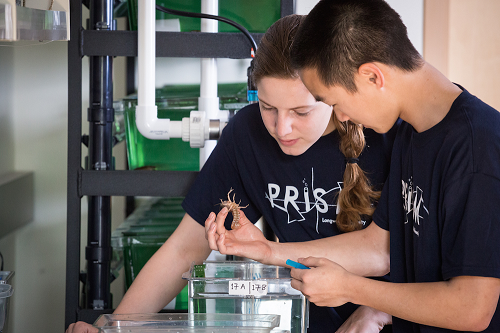 During the summer, Patty Hale ‘16 and James Wilson ‘16 are studying the potential impacts of invasive crayfish on native crayfish.

It’s like an episode of “Survivor,” but for the students studying these crustaceans, the implications have more to do with conservation than a million dollar prize at the end.

As Hale ’16 and James Wilson ’16 peer into the bucket, two species of crayfish — one native to Virginia, one not — struggle for dominance. “That one over there has no legs and no claws, yet he’s still alive, which is unusual,” observes Hale. “If you have no claws, you’re perfect bait food. Crayfish aren’t the kindest creatures — the larger ones tend to go after smaller ones — but they are interesting.”

Along with Dr. Sujan Henkanaththegedara, assistant professor of biology at Longwood Unviersity, Hale and Wilson are studying the potential impacts of invasive crayfish on native crayfish as part of this summer’s PRISM research program.

They are observing and recording scenarios in which invasives have been introduced to natives, with both forced to contend with limited food and shelter. The results are not always pretty. The Longwood researchers want to know if invasive crayfish deserve the bad rap they have acquired among biologists, most of whom are convinced they “outcompete” and otherwise negatively affect native crayfish. So Hale and Wilson are running experiments testing predation, competition and survival between native and invasive crayfish, to estimate what Henkanaththegedara calls “proportional survival.”

“The dogma is that everything about invasive species is bad, but we think that’s not necessarily true. It depends on many factors, including the interacting species and the natural system they occupy,” he said, adding that research data will enable conservation practitioners and managers to make better decisions in invasive crayfish management.

“To my knowledge, this is the first time that the potential impacts of multiple invasive crayfish on a native crayfish species have been studied,” said Henkanaththegedara.

Regardless of the results, Wilson and Hale, both of whom plan to attend graduate school, are enjoying the research.

“I like the fact that we get to learn things for ourselves,” said Wilson. “This is a new area of study, and we’re learning as we go. There’s a lot of trial and error. I enjoy being part of the science community and meeting crayfish experts. Before this project, I didn’t know anything about crayfish.”

Hale echoed those sentiments. “Dr. ‘Henk’ gives us full rein, which we like. He just tells us what he wants done, then helps us figure out how to set up an experiment. There are a lot of different ways to figure out a problem. We’re learning science skills, research skills. Before, I didn’t think of all of the steps that are involved.

“When I talk to people now, I feel like all I talk about is crayfish. That’s what my family says,” she added with a laugh. “When I told my sister, who is a teacher, about this project, she said not to tell other people about this unless they’re in the sciences. I’m always looking up information on crayfish. This is always on my mind.”

A paper on the first test trials in this project, co-authored by the students and Henkanaththegedara, was presented by Wilson and Hale at the annual meeting of the Virginia Academy of Science in late May. Also at the meeting, Hale received the VAS’s Vera B. Remsburg Scholarship, recognizing undergraduate research excellence, for her role in the crayfish study.

The scholarship is named for a 1942 Longwood alumna.