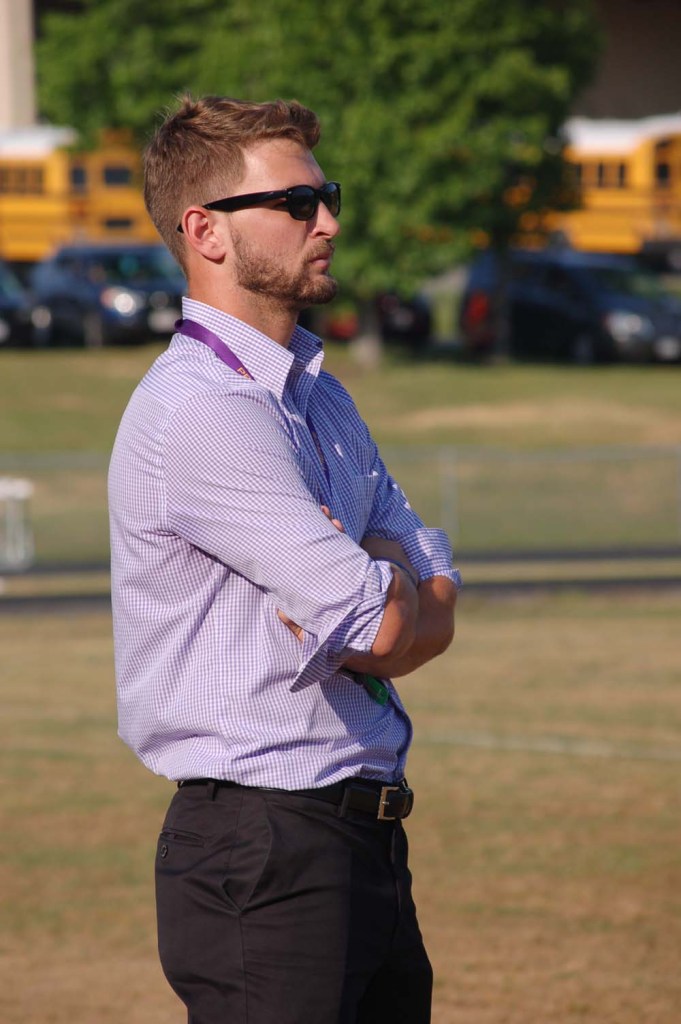 Pierce began coaching the Eagles last season and since then, has led PECHS through two undefeated regular seasons.

“Oh, that has nothing to do with me,” Pierce said regarding the team’s success. “I adopted a great group of guys. Last year, the five seniors on the team pretty much led the team. If the field needed painting, they went out there and did it. They ran the group talks and they led the team warm-ups. I just put my name as head coach. I can give them some guidance to how to play and how I would like them to play. But, they are good without me. I don’t teach them everything that they know about soccer. But, I do help them work best as a team,” Pierce said.

Although he doesn’t admit to leading the Eagles to their undefeated seasons, Pierce says that he can see changes in the way the team works together since he took over as coach.

“They love each other this year. Last year, there was a lot of bickering and fighting because of pride issues. If there were two players deciding which one was going to take a free kick, they would stand there and argue over it. This year they have started to say, ‘Okay, you take the kick. I am confident and proud of you.’ We adopted the mantra PREACH this year. It stands for Proactive, Resolute, Encouraging, Accountable, Confident, and Humble. The ‘E’ has made the biggest difference this season,” he noted. Pierce says that the mantra has taken his team a long way this season, especially in the Eagles regional tournament game against Maggie Walker.

“Last season, Maggie Walker defeated us 3-0 (in the first round of the VHSL 2A East Region Tournament). We have had the worst taste in our mouth since then. That is what we were fighting for all year; the chance to play Maggie Walker. As a team, we actually went up and saw Maggie Walker versus Bruton in their conference championship,” Pierce said.

“Knowing that Maggie Walker should have won, we were scouting Bruton. It just so happened that Bruton won and pulled off the upset. As soon as that last goal went in, my guys turned to me and said, ‘It’s time. Now it is time for revenge.’ They are a very good team and well-coached. But, our guys, I just think they wanted it more. Last year, they were scared and looked over during the warm up comparing themselves to Maggie Walker’s players. This year they just did their thing. I actually saw Maggie Walker looking at our guys. The roles were reversed.” 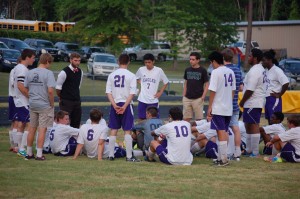 Devin Pierce speaks to his team during half-time of a home match. (Photo by Hannah Davis)

During this season’s regional game against Maggie Walker, the Eagles ended regulation in a 1-1 tie. Then they played in overtime and double-overtime, before heading into a round of sudden death.

“I don’t know if it would be like coach’s intuition. Sometimes I can feel something bad coming and I can look over at our goalkeeper (Rafael Dimaano), and look at the goal and kind of imagine how we are going to be scored on. But, that night I had no thought of that,” Pierce added. The Eagles went on to defeat Maggie Walker 2-1 during that game.

Even though his team will be losing four players next season, Pierce is confident in the future of the PECHS varsity boys soccer program. “Since I have been here, we have been contenders. Next year we will still be okay. But, what about after that? PEFYA (Prince Edward-Farmville Youth Association) does a good job at getting the kids to love the game. Then, the Heart of Virginia Soccer Club does a good job of molding their skills. With their help, I think we are going to be doing just fine,” he ended.