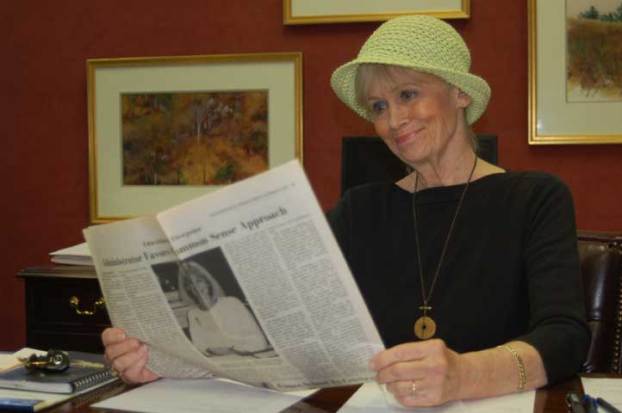 Ruth S. Murphy, Fuqua School president for the past 21 years, views a younger version of herself in an Oct. 21, 1994, Herald article written shortly after she assumed leadership of the school. Murphy’s standard of academic excellence has continued throughout her tenure at the school. (Photo by Marge Swayne)

FARMVILLE — Retiring Fuqua School President Ruth S. Murphy can describe the school she served for 21 years with three words — “boundless individual potential.” Now a part of Fuqua School’s mission statement, the concept of developing individual potential in students, teachers and administrators has been Murphy’s goal during the course of her career in education.

“The very first thing I wanted to do when I came here was to make sure that the people who worked at the school, teachers and administrators, knew that I believed strongly in collaborative decisions,” she said. “I wanted everyone to have a sense of ownership in the school.”

Murphy believes her personal mission at Fuqua School was inspired.

“I’ve always felt I was meant to come here,” the Greensboro, N.C., native added. “I think there are things in our lives that happen for a reason. For me to pick up and come to Farmville, Virginia, when I was on the superintendent track in North Carolina — it was meant to be.”

Murphy was principal of New Hope Model School in Chapel Hill, N.C., in 1992 when J.B. Fuqua came to visit the school. A year later, she had taken a position as executive director of elementary education to assist with the merger of Durham County schools when she received a call from the corporate offices of J.B. Fuqua in Atlanta.

“He offered me a job at a school in a rural community in Virginia,” she said. “I’d never heard of Farmville, Virginia!”

At the time the school was Prince Edward Academy, established after the U.S. Supreme Court ruled in Brown v. Board of Education that public education be racially integrated. As a result of that decision the Prince Edward County School Board closed all of its schools. Prince Edward Academy was established at that time as a private school to educate white children in the county. Public schools remained closed from 1959 to 1964. When the public schools reopened, PEA continued as a private school.

“By 1993 PEA had significant financial problems, as did many independent schools,” Murphy said. “For many reasons Prince Edward Academy would have closed if Mr. Fuqua had not come in and given the $10 million gift.”

Businessman J.B. Fuqua, whose corporate headquarters are in Atlanta, grew up on his grandparents’ farm in the Elam section of Prince Edward County.

Known for his philanthropic efforts, Fuqua had previously donated $10 million to Duke University for its business school, subsequently named the Fuqua School of Business.

“Several members of the Prince Edward Academy Board decided to approach Mr. Fuqua and ask him to help the school,” Murphy continued. “Mr. Fuqua agreed to help on the condition that it become a school of excellence for rural America which included opening its doors to all students.”

“From my discussions with Mr. Fuqua, I believe he also gave the money to help heal this community,” Murphy added. “It was his home.”

In the fall of 1994, Murphy came to Farmville to lead Prince Edward Academy, now Fuqua School, into the future.

“The first year I began making the changes I wanted which were substantial,” she said. “I formed planning committees for the teachers to look at three different things.”

The first item on the agenda was block scheduling for the upper school.

Next was a look at the middle school.

“We were operating as a junior high school with the kids changing classes just like the upper school,” Murphy said. “There was no team planning. Middle schools differ in that teachers work in teams and have joint planning time for curriculum. There is a concerted effort in middle school to address both academic and emotional needs of children.”

The third model studied was the most controversial — multi-aging. In multi-aging the children stay with the same teacher for two years.

“It was amazing to me that a conservative area like rural Virginia could embrace multi-aging,” Murphy noted. “I think that now — 20 years later — if I tried to take multi-aging out, parents would be upset.”

Once these goals were addressed, Murphy worked on community relations.

“When I came here my perception was that Prince Edward Academy was somewhat isolated,” she said. “I felt it was imperative for Fuqua School to be an active and integral part of the community, and I went about taking specific steps to make that happen.”

When the Robert Russa Moton Museum, considered “the student birthplace of American Civil Rights Movement,” invited Fuqua School to have a seat on its board of directors in 1997, Murphy accepted.

“I personally participated,” Murphy noted. “I saw this as a wonderful opportunity to not only learn more about the history of the school, but of the broader community. I would never have had that perspective if I had not been so involved with the museum.”

“Upon arrival, the (Fuqua) students and teachers were well-prepared to engage our county’s shared history in an open, inquisitive and insightful manner,” Ward said. “Their preparation was a testament to Ruth Murphy’s leadership in openly acknowledging our painful 20th century history as a means of preparing our 21st century students for the challenges they will face and overcome in their lives.”

Ward added, “Ruth is an inspiring educator, and her long-term participation on the board of directors helped make Moton the nationally respected community museum it is today.”

To that, Murphy added, “It is my hope that our involvement has helped the African-American community recognize the efforts that Fuqua School has made.”

Additionally, Murphy was an active member of the Farmville Rotary Club, serving as its president from 1999 to 2001. She was also a member of the Prince Edward United Way board and served on the board for the Wilson Center at Hampden-Sydney College. Murphy was also on the board of the Virginia Association of Independent Schools.

As for the future, Murphy and her four cats will soon be moving to North Carolina.

“I’ve found a house, and I plan to renovate it,” she said. “Then I may just travel — go to places I’ve never gone to see.”

“Fuqua School is a special place,” Murphy concluded. “Our focus has always been to develop our students’ strengths — boundless individual potential.”

That individual potential has been realized many times over under Murphy’s leadership during the past 21 years. The most recent class of 39 graduates collectively received more than $4.2 million in college scholarships.

Although Ruth Murphy’s tenure at Fuqua School is over, a continuing legacy of “boundless individual potential” remains.