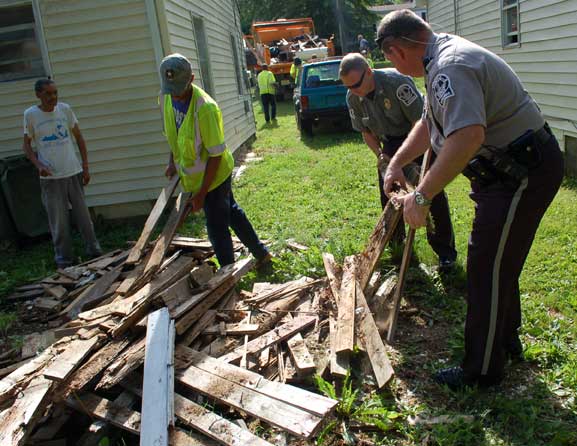 Farmville police and the Town’s Public Works Department teamed up to help residents on South Virginia Street clean up their neighborhood. Here they remove pieces of wood from the back yard of an appreciative John Toney (far left). This crew included Jowan Crawley, Police Chief Curtis Davis and Captain A.Q. “Andy” Ellington. (Photo by Rob Chapman)

Reaching A Community By Lending A Hand

FARMVILLE — On a hot and muggy Monday morning, Farmville police officers were making their way along a section of South Virginia Street with employees from the Town Public Works Department, tossing discarded items into the back of an orange dump truck.

“Do you want us to take it all now?” one of the team members asks John Toney, having started removing weathered strips of old wood.

Toney appreciates the town helping him clean up. The wood in the home where he’s lived for 39 years comes from two replaced floors. The short pieces he’s saving for a neighbor who has a wood heater. But the rotting long wood can go.

Winter, despite the searing June heat, will assuredly come again.

Farmville police officers are making an effort to connect with neighborhoods, and this is a pilot step for a program outside of enforcement, a cooperative effort that includes the Public Works Department. It better connects them to the community they serve.

Officers have previously gone door-to-door in the community, met residents individually and documented their specific concerns, evaluated them and helped the community in its identified area of need, explained Farmville Police Chief Curtis Davis.

“One of the things is that they … felt like maybe … littering was a problem … and they felt bad about the fact that it seemed like they couldn’t stop the littering that was going on,” he said.

Part of this is also enforcement, Davis said. If people are littering, the department is going to take the necessary enforcement action to try to keep the neighborhood clean. “We’re hoping maybe that we won’t have to do it that way, but we’re ready to do it if we have to,” he said.

The town’s police department is also planning an organized community walk in the coming days, inviting anyone to come out and participate — to express whatever concerns they have.

It is, of course, a good time of year to launch the effort. Davis points out that the majority of college students are gone and police have a little more time to concentrate specifically on the area. Calls for service justified the need to work in the particular area, and citizens had issued some concerns.

“It’s not that one area is a bad area or worse than others [in] calls for service demands,” Davis said. He noted that “later in the year we may have higher calls for service in other areas that’s gonna require us to do that. In fact, we’re in the process right now of looking for another one for the fall. We started going door-to-door in some of the boulevards in areas where there’s student housing to try to work on some repetitive issues when the students arrive to be able to do some problem-solving with that. And everything has a little different aspect … in some neighborhoods and approaches, but having the police involved in community events is a major thing that has to happen. Officers can’t just be seen when there’s enforcement needed. We have to be involved in a lot of things. So we intend on doing this all over town. This happened to be the first area.”

So far, so good. It didn’t take long for the truck to gather a collection that included a rusty water heater and some old furniture.

A cleaner neighborhood makes you feel better about your neighborhood, said police Sgt. David Ragland. It also gives officers an opportunity to meet with citizens one on one.

“You know, that’s kind of the whole thing we’re trying to do here … We want them to know who we are, and we want to try to find out who they are,” he said.

The connection is also occurring in areas other than Virginia Street. Farmville police officers are getting out of the vehicle in recent weeks to talk to businesses and go through neighborhoods door-to-door. It builds trust with the community and, Davis notes, gives officers a chance to meet with folks without it being an enforcement action.

“You don’t always want to be met by a police officer on a traffic stop or call for service or some critical situation, so [it] gives them a chance to sit around and talk about things in general. Lots of times, the conversation gets right away from police and citizen. It gets into fishing or…sports or who knows what. And that’s just a good way to do business, I think.”

FARMVILLE — The ruptured water line that drained water tanks in May has given Farmville’s Town Council pause for thought... read more