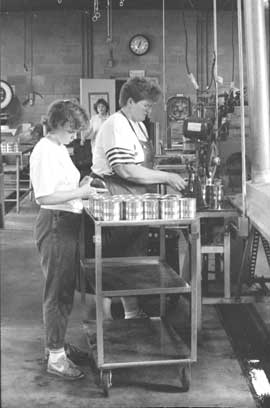 Lena Rose Huddleston, (right) after 40 years, has called it a career. Huddleston, seen here in 1988 photo, is the longtime manager of Prince Edward’s cannery. (Photo by Rob Chapman)

PRINCE EDWARD — After 40 years in the kitchen, Lena Rose Huddleston, the manager of Prince Edward County’s cannery, has finally put a lid on a long career.

At age 75, she figures it’s time to quit — especially now that the great-grandchildren are coming along.

“I just thank the Lord every day that I have been blessed that I could do this,” the now retired Huddleston said.

Huddleston, who often shares an infectious laugh, said she loved helping people and seeing people put food up for the winter.

“They were just a good bunch of people that I worked with,” Huddleston said.

Huddleston was a special education teacher at Prince Edward County some 40 years ago when one summer day she happened to be at the cannery — canning, of course. She was asked to pitch in to help the rest of the day and managed it ever since.

She remembers Jasper Hendricks taught her how to use the pressure cooker.

“I took some short courses from VPI on how to take a seal apart and put it back together and you had to learn how to…seal a can, you had to know how to see if they…sealed properly for them to keep,” she said. “If they won’t sealed properly, they were not gonna keep. And then from there on, it was one experience after the other.”

She’s had help working the equipment over the years, including her 80-year-old husband, Tommy, who started in 2000 and worked through part of last summer.

“Yeah,” she laughs, when asked if you can get any work out of a husband at a cannery. “He ran my pressure cookers for me. But I had to teach him.”

As is often the case, she ends the comment with a chuckle. There are lots of laughs when Huddleston is around. She just brings not only a helping hand, but some joy, too.

“You know in my experience there, we met so many good people…and the type of people that we had to work there with was people that tried to help themselves,” Huddleston said.

Canners are early risers and Huddleston—before tossing in her apron—had to be at the cannery by 6 a.m. in advance of the first customers arriving at 6:30. For those who think that’s early, for years she rose at 4 a.m. and helped milk cows on the rural Cumberland dairy farm they once operated before heading across town to Abilene Road and the cannery.

“I have to wait sometimes for (local WFLO radio station personality) Henry Fulcher to sign on at five,” Huddleston laughs. “I’m always teasing Henry about that.”

The top thing that people can is tomatoes, but folks using the cannery make a lot of different things—tomato soup, spaghetti sauce, Brunswick stew … Huddleston even had available recipes as needed.

The most unusual food someone canned? Chitterlings. One man, Huddleston said, loved them and she would can them for him to enjoy when his wife was away.

But not everyone, of course, understands it’s a self-serve process.

“… (There’s) some that don’t understand the cannery and they would come and set their vegetables in the door and say, ‘I’ll be back in a couple hours and I want them canned in quart cans.’ And I would say, ‘Wait a minute, wait a minute, that’s not how this works. You gotta do it,’” chucked Huddleston.

Huddleston, of course, has plenty of stories to tell. Such is the case when one draws from such a storied life.

There was this one time when a husband a wife came into the cannery and argued, she recounted. They had two beautiful bushels of tomatoes and couldn’t agree what to do with them.

“So the man turned around and said, ‘You want these tomatoes? Said take ’em. We can’t agree on it, we’re going home.’ Left two bushels of tomatoes there,” Huddleston said.

The cannery is a place to save your garden in advance of the chills of winter, but it was also a place where folks shared in their bounty as well. People would give her fresh corn, would see who could bring the biggest head of cabbage, the first ripe tomato…

Huddleston rarely buys canned goods herself from the store. There are so many additives, she says. The thing about the cannery is what you put into the can is what you get out.

Huddleston wants to keep doing something a couple of days a week, rather than just stay at home. We found her pitching in to help at Miller’s Country Store in Farmville.

“See a lot of people and talk to people and find out gossip and what’s the latest going on,” Huddleston chuckles again.

For now, she’s out of the Cannery’s big kitchen working on her own retirement recipe.

Continuing to serve smiles and laughter wherever she goes.

Frazier Chosen For PE School Board