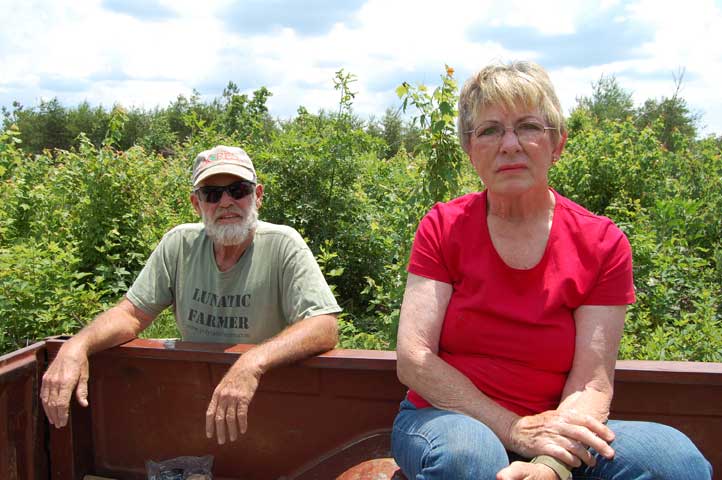 Alongside her husband, Rob, Beverly McQuary (right), who is being sued by Atlantic Coast Pipeline LLC, sits in the path of a potential alternate route of the 42-inch natural gas pipeline that could run through her property. (Photo by Jordan Miles)

BUCKINGHAM — Atlantic Coast Pipeline (ACP) LLC has filed legal action in Buckingham Circuit Court against two landowners along a potential alternate route that its partners are considering in planning the proposed path of a natural gas pipeline.

According to the Virginia Courts Case Information website and the Buckingham Circuit Court Clerk’s Office, civil suits have been filed against Robert Calvin Day Jr. and Beverly B. McQuary—both of whom own property along Woodland Church Road near Yogaville.

“It’s laughter. This is so stupid,” Day, who owns about 30 acres of land, said of the suit. “The route…would take out the best part of my frontage…They’d basically make it very difficult to access the entire 30 acres, because that’s the only deeded road access that I have.”

No surveying has been conducted on his property to his knowledge, Day said.

“I don’t want the pipeline coming across my property…I’m going to refuse everything,” said McQuary.

“The Atlantic Coast Pipeline yesterday filed legal actions against 27 landowners in three Virginia counties, with 22 filed in Nelson, three in Augusta and two in Buckingham,” said Dominion spokesman Frank Mack in an e-mail to The Herald. “Overall, the ACP expects to file legal action against more than 100 landowners who have refused to give permission to survey along the proposed route.”

Mack confirmed that the two landowners in Buckingham are in the proposed path of the Wingina Alternate Route, which, if adopted, would move the 42-inch natural gas pipeline’s entrance into Buckingham about three miles northeast of the proposed route, closer to the Yogaville community.

Dominion, the lead partner of the proposed 550-mile natural gas pipeline project, is seeking federal approval to bury a 42-inch pipe through Buckingham, in addition to building a compressor station that would have over 40,000 horsepower.

“Surveys are needed to gather environmental, historical and cultural information about the study corridor so that the ACP can choose which route would have the least impact,” said Mack.

Mack said some of the landowners may grant permission before any hearing occurs, “which, of course, we would welcome. We expect the legal process to take several months for those who have not given us access to survey,” he said.

Day said that he never received a second letter from ACP regarding surveying.

According to an opinion on State Code issued by the Attorney General’s Office of Virginia eight years ago, if a natural gas line company requests a landowner’s permission and later sends a notice of intent to enter, both by certified mail, and the owner does not respond, the company can enter the land to survey, and will not be considered trespassers.

“If Dominion or the ACP follows through with this, it is likely that [the] Virginia statute will be struck down,” Day said. He called the ACP “a land-grab and a pure profit-seeking adventure.”

“These landowners have been steadfast in telling us they will not grant permission to survey regardless of the Virginia law that allows us to enter their property to survey once notifications are made as required by that law,” Mack said, adding that ACP could send surveyors “onto their land today, but the company reached out one more time to see if they would reconsider and allow surveying.  We notified them that if they did not grant us permission, we would file legal actions and ask the court to affirm the law.”

McQuary, who owns three parcels of property totaling 128 acres, said she plans on fighting the suit in court.

“They can serve all the papers they want to…I don’t know why they picked the two of us. There’s at least a couple more [whho] refused also,” McQuary said of the two filed suits.

She has refused to allow the ACP to survey on her property.

“They have not followed protocol,” she said, referencing a second letter from the ACP she says that she didn’t receive.

According to Mack, prior to June 2 when ACP filed legal action against the two, “…there has been no court ruling on any legal action regarding access to landowner property…” in Buckingham, Cumberland, or Prince Edward counties.

As of June 2, ACP has surveyed 87 percent of the tracts of land in Buckingham, 97 percent in Cumberland and 95 percent in Prince Edward. Mack says it’s too early to tell if, or how many additional legal actions will be filed in the three counties.

Over 800 Workers Could Build Pipeline Regionally