PECHS Grads Encouraged To Be Determined 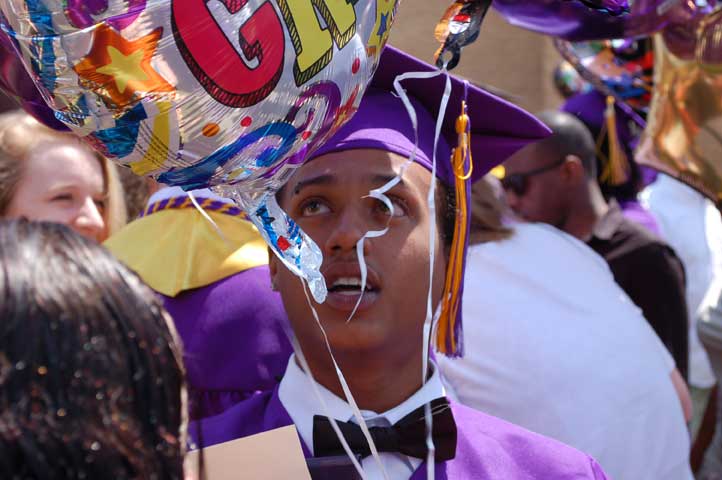 PRINCE EDWARD — It has been only five years since Prince Edward County High School graduate Courtney Garrett earned her own diploma, but a lot can happen in five years—and on a stage bigger than the one inside of the County’s middle school gym.

Garrett, returning to her alma mater as featured speaker for Saturday morning’s commencement exercises, has earned a communications degree from Liberty University, garnered multiple awards and recognition. And, oh yeah, is the current Miss Virginia, and was the first runner-up in the Miss America pageant.

Garrett encouraged the Class of 2015 to dream big, to have no inhibitions.

People thought she was crazy, she reflected, when she told them she wanted to be Miss America.

“You, a little girl, no training, no money from Pamplin? You want to be Miss America? OK. But I believed in myself and I surrounded myself with incredible people that believed in me. And I encourage you guys to do that, too. Have those goals that seem so far out of reach and to stop at nothing to achieve them,” Garrett advised.

Garrett competed four years for the Miss Virginia crown, finally achieving the goal in 2014. She encouraged the class to not miss it. You can lose or you can miss it by having your mind and your heart set on materialistic substantial things, she advised.

“Every year that I would go to Miss Virginia, it was discouraging for a moment not to win the crown,” she said, “but my goals were set on things aside from that—on the experience, on the friendships I made, on the obstacles I had overcome, on the goals that I had set aside from that angle. So I encourage you graduates when you have those big dreams in mind, don’t get discouraged when it doesn’t happen for you at first. Have goals for the journey. Enjoy the ride and soak up the experience. Don’t miss what’s right at your fingertips.”

She also encouraged the class to be determined.

Garrett related the story of her 18-year-old brother, Austin, who sat with his classmates in cap and gown. Born with a pneumothorax (a small hole in his lung), Austin suffered an extensive loss of oxygen and his brain was damaged. Garrett detailed that her brother had a 6 percent chance of survival. Within the first 72 hours of life, he was sent to three hospitals. Austin received a special treatment and they prayed and waited through the unknown.

“My mother said it was the longest, most grueling three weeks of her life,” Garrett said. “And the doctor came … after three weeks and said that there’s no medical explanation, there’s no scientific explanation. ‘I am not a religious man, but somebody didn’t want your son to die.’ ”

God, she added, wasn’t finished with Austin. He had bigger plans.

Austin had developmental delays, was diagnosed with cerebral palsy and autism. Still, Garrett reflected that it was a “blessing God chose our family to give this very special angel to. I am the person I am today because of the things Austin has taught me. And one of the things is to be determined.”

She added, “Every person has their own milestones. Each and every one of you have your own gifts and talents. Don’t run somebody else’s race. You be determined with your gifts and your abilities and your journey and know that your milestones are important to you. Don’t compare them to somebody else’s. Don’t let your circumstances define you.”

It was a long journey for Austin to walk.

“They said he’d be a vegetable, he’d never walk, he’d never talk, he wouldn’t amount to anything … Boy, were they wrong,” Garrett said. “Austin not only walks, he runs in Special Olympics events each year. He very clearly communicates what he does and does not want on a daily basis and is anything but a vegetable. He didn’t give up.”

The only failure in life, she said, is the failure of not trying.

Austin, through the cheers of the crowd, was able to walk across the stage with Garrett.

“When you want to give up, when you feel like you’re at the end of your rope, remember this day,” Garrett also advised. “Remember seeing Austin walk this stage triumphant despite all the factors that were working against him. Remember your journey and all it took to get you here and allow that to fuel your passion.”

Valedictorian Triston Smith, who plans to attend the University of Virginia, encouraged his classmates to tell people that they love them, tell those who are appreciated that they are, and to never be unwilling to learn.

“When you’re green, you grow; when you’re ripe, you rot,” Smith said. “Don’t let yourself rot before its time. Keep your mind fresh and open to new ideas. There have never been more resources at your fingertips than there are now, and there’s no excuse for an unwillingness to do your best.”

Failure, he also said, is a part of life, but failing doesn’t mean one is a failure. “You’re only a failure if you stop trying,” he said.

Smith added, “It’s up to you and only you to decide what your outlook on life will be. There are no other factors and no acceptable excuses. Life isn’t going to be fair; I think we all know that to be a fact at this point. But that doesn’t mean it can’t be enjoyable. Make every single hour count for as much as you can muster and embrace the hardships.”

Salutatorian Rachael McDermott, who plans to attend Shenandoah University and study dance, offered that her wish for classmates is that they find in their life what dance is in hers.

“Countless times I’ve been told that dancers don’t make a lot of money, that there aren’t many job opportunities out there and have been questioned if this was really what I wanted to do,” she said. “Right now, all I can tell you is the answer is yes. As you get ready to start college or whatever is next in your life, I hope you remember one thing: Never give up on what you truly want to do.”