Diamond Grove, a two-story wood frame home built in 1844 for the Rev. James D. and his bride Amanda Hundley Crawley, was dismantled in 1990. All that remains now is the white frame kitchen portion of the home which can be seen from the yard of Prospect United Methodist Church that was designed and built by the Rev. Crawley and his wife. It must have been a warm day when this 1901 photo was taken because the curtains have blown out of the open upstairs window. Working shutters are evident by the closed one downstairs. Both the church yard, open fields, and home were the site of Federal troop occupation in the closing days of the Civil War.

While driving along Prospect Road the other day, I was saddened to see a realtor’s sign with contract pending attached to it at the driveway entrance to the once prominent Diamond Grove home and estate.  I only wonder what will become of the rolling open fields, the briery thickets, and the stately hardwoods.

The history of Diamond Grove and the Prospect Untied Methodist Church are intertwined.  In 1844 the home was a wedding gift to the 16 year old bride Amanda Melvina FizAllan Hundley from her father, a prominent farmer and businessman in Mississippi.

It was love at first sight for young Amanda when she met 30 something James Daniel Crawley, an overseer’s son from Charlotte County who wanted to become a Methodist preacher.   At first Hundley disowned his daughter when she told him of the marriage proposal but then seeing that his headstrong daughter was going to do as she wanted, he relented and gave them the house as a wedding gift but no money.

It was a constant struggle for the young couple but James fulfilled his ambition by  becoming a local pastor for the Prospect Methodist Church and a lay speaker for other Methodist churches in Prince Edward and Appomattox counties.   In the next few years after their marriage, the couple personally designed the stately church that stands at the intersection of Prospect and Pin Oak roads.

One can stand on the steps of the church and look across the open field to see the kitchen portion of the Crawly home still standing.  The Crawleys raised several children and entertained many visitors in the large two-story frame home that never greeted a stranger.

In 1990, Cornell and Camilla Patterson sold the structure to a gentleman who dismantled it with the intention of reassembling it elsewhere.  He left only the kitchen.  No one knows what became of the rest of the house.

The church and the home became part of the closing days of the American Civil War.  After the Battles of High Bridge and Cumberland Church, General Lee marched his Confederate troops along the longer but smoother Richmond-Lynchburg Road north of the Appomattox River hoping to reach Appomattox Station and the waiting ration and supply trains.

In their pursuit of Lee and his supplies, Federal troops took the shorter southern route along the South Side Railroad.

Union troops, following the railroad, arrived at Prospect Station on April 8 and bivouacked in the Prospect Methodist Church yard and the surrounding fields.

While the Unions soldiers were camped at the church, troops bore holes in the church’s walls and inserted pegs on which to hang their clothing.  The holes are still there although hidden by renovations.

According to Fay Moorman, a Crawley descendant who retold the story of occupation in her book My Heart Turns Back (1964), the first Union troops to arrive in Prospect had been drinking heavily and proceeded to ransack the Crawley home and grounds in search of Thomas Crawley, Confederate solider, who had returned home to recuperate from a hole shot through his knee.  Thomas successfully hid himself in the lumbar room over the ice house and then escaped to the thickets below the house.

The Rev. James Crawley happened to be away on business. One Union soldier found Amanda Crawley feeding her baby and took the silver spoon that she was using.

She immediately reached to her throat and snatched the broach with a photo of her mother from her dress and threw it in the burning fire place before she would let a Yankee have it.

Mrs. Crawley, fearing for the safety of the rest of her family, herded her children upstairs to wait for whatever would happen next.  The first night of the occupation all of the Crawleys went to bed hungry while the Federal troops feasted on the stores that they had found.

On April 10, General Grant left Appomattox Court House in route back to Burkeville and eventually to Petersburg and City Point.  When Grant and his staff arrived in Prospect, they spent the night and took command of the Crawley house.  While sitting at the dining room table, he saw a young girl (Fay Moorman’s mother) peeping around the door.  He asked her if she had eaten to which she replied no.  He reached to the table, took a plate of hot biscuits and emptied them into her mother’s white apron which was hanging on a nearby chair.

She took it upstairs to her family. Grant then reprimanded his troops for their behavior and treatment of the family and order that no more destruction be done and that the family be properly fed.

As ill-clothed, ill-fed, ill-tempered , disheartened, and hopeless soldiers roamed the country roads in search of their way home, many stopped at Diamond Grove where they were always welcomed by the Rev. and Mrs. Crawley.

One day years later, a stranger arrived at the Prospect Depot looking for the home of the Rev. James D. Crawley.

Only Charlie Crawley was left living in the community, but he graciously showed the stranger the home place and inquired why he was visiting.

The man had a clipping of a Philadelphia newspaper article written by one of Grant’s men who had stayed at a white house in the village of Prospect, somewhere in Virginia, not far from Appomattox.  He had written, “I cannot forget the kindly white-haired gentleman, a clergyman, who treated us not as enemies, but as friends.  I should like to go back some day and thank him.”  The young stranger was not the soldier, but someone who had been deeply moved by the story.

There were no citizen comments at the public hearing for the proposed FY2016 Pamplin town budget.  During council session the budget was adopted and appropriations were voted on for the coming fiscal year.

Council reviewed bids submitted for the finishing of the Depot flooring.  Custom Flooring from Farmville, Jamie Davis, owner, were selected for the job.  Artie Jackson is currently working on redoing all of the entrance doors on the Main Street side of the building.  Mayor Billy Horton is working on a proposal for town office signage.

The Prospect Volunteer Fire Department Auxiliary meatloaf supper will be Saturday, June 20, from 5 p.m. to 7 p.m.  Cost is a donation at the door.  The meal will include meatloaf, mashed potatoes, green beans, bread, drinks, and desserts.

The Kitchen Light Community Dinner will be on Thursday, June 25, from 5:30 p.m. to 7 p.m. at Glenn Memorial Baptist Church in Prospect.

The Pamplin Area Legacy Supporters (PALS) will have an art show and reception for local artist Diane Hindenlang at the Pamplin Depot on the evening of Saturday, July 11, from 6:30 p.m. to 8 p.m.  Some of her landscapes and other nature works are hanging in the Depot now.

Frances Wright of North Carolina and Margaret Burroughs of the Bethlehem community visited with Dorothy Womack on Saturday.

Henry and Evelyn Shelton were honored by their daughters, Debbie Smith, Donna Arrington, and Diane Scheid, with a 50th wedding anniversary reception dinner and dance at the Farmville Train Station on Saturday evening, June 6.  Many friends and family were in attendance and had an enjoyable time.

Members of the Class of 1963 from Prince Edward Academy met at Charley’s Waterfront Café for lunch on Monday and to discuss plans for the upcoming 52nd class reunion to be held on June 27.  Those in attendance were Mike Andrews, Edith Ann Austin, Johns Bailey and wife Dorothy, Aurelia Boyce, Julian Covington and wife Edwina, Nancy Cumpston, Allison Martin, John Richman and wife Anne, and Andy Wilkerson.

Sympathy is extended to the family and friends of Samuel W. Watkins and May Cunningham Shorter,

“A small body of determined spirits fired by an unquenchable faith in their mission can alter the course of history.” – Mahatma Gandhi 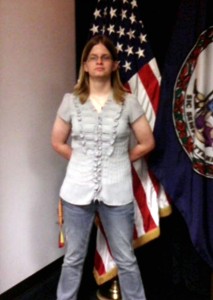 Kathleen Murray, daughter of Noreen and Pat Murray of Pamplin City, proudly volunteered to serve her country in the Untied States Marine Corps. The 2015 Appomattox County High School graduate was sworn in on the evening of June 8, with her tentative shipping date to basic training to be December 14.