It seems that Mark Twain had the weather figured out well over a century ago.

In Twain’s view, climate was the big picture. Weather was more like a collection of daily snapshots.

Unfortunately, we aren’t the ones holding the camera. No, we don’t get to choose our weather, a fact that has bothered humankind since the beginning of time.

It’s hard to imagine, but there was a time when Earth enjoyed a perfect climate. It was so pleasant, in fact, that Adam and Eve strolled around the Garden of Eden sans clothes. But outside the garden a storm was brewing, and once the first couple stepped outside they noticed a drastic change in the weather. You might say that Adam and Eve discovered weather, and we’ve been learning to deal with it ever since.

No one escapes the weather. The Bible is pretty clear on the subject. Since the beginning of time it has rained on the just and the unjust.

Is that about to change?

The Old Farmer’s Almanac can’t quite seem to decide.

A decade ago the Almanac reported, “Global climate is changing, and there is no simple answer for what is shifting the world’s weather.”

The Almanac went on to describe some unusual weather phenomena of that time — like basketball-size hail and the largest raindrops ever seen. Each drop, one-quarter the diameter of a golf ball, would add a whole new dimension to a “water hazard.”

Last winter the big news in our area was the “polar vortex.” More commonly known as the polar jet stream, the vortex apparently decided to pay us an extended visit. The result was a number of single digit days in the Farmville area while in Alaska, the famous dogsled race, the Iditarod, had to move 225 miles north due to lack of snow.

So what exactly is going on? Most would agree that the weather is changing, but the bigger question is — why?

“Bio-aerosols,” for example, are not all man-made. They can also include plant pollen, spores, and hair and fur particles. Add that to the billion tons of aerosol pollution filling the sky and something is bound to change.

At any rate, when aerosols fill the air, it’s not a good thing. Some of them reflect sunlight, cooling the atmosphere, while others absorb heat.

It’s no wonder the weather is so changeable.

In a recent Almanac, the Old Farmer stated, “We at the Almanac are among those who believe that sunspot cycles and their effects on oceans correlate with climate changes. Studying these and other factors suggests that a cold, not warm, climate may be in our future.”

Maybe it’s time we did.

While climate is still the big picture and can’t be altered overnight, a change of focus just might help. 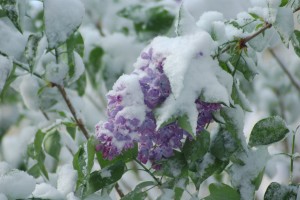 Christmas in April? These lilacs near Farmville were blanketed with snow a few years ago — living proof that weather is not following the rules.

Celebration At House Of Prayer