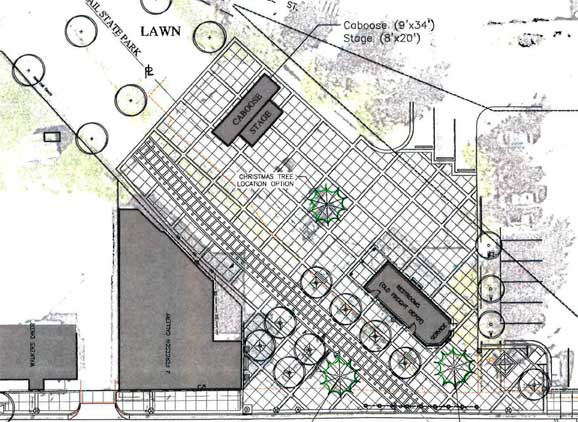 Farmville’s Town Council was presented with a graphic detailing a potential relocation for the caboose from its site off West Third Street to a location behind J. Ferguson Gallery off Main Street.

FARMVILLE — Town Council last week was presented with a rendering of a relocated site for the caboose and possible sites for the town Christmas tree.

While council has not finalized a plan, the preferred option appears to be a site behind J. Ferguson Gallery on the north side of High Bridge Trail.

“Part of that is paved,” said Town Manager Gerald Spates at a June 3 work session. “But it’s not really much in there…What we do is move that fence that’s around the existing depot building and reuse that wrought iron fence…It would really dress that area up.”

Spates reported that the town has received two bids, the lowest for $12,800, to move the caboose from its current location next to the historic train station on West Third Street to the plaza.

“I think the concept is fantastic, personally…I think it’s a good focus point for us to use downtown as far as to try to enhance downtown,” Councilman Tommy Pairet said.

Mayor David E. Whitus asked council members if everyone is OK with the caboose going in the proposed site, with none registering an objection. He further suggested they at least get some prices.

Council also discussed options on Christmas tree placement, including sites along Main Street, but favored a location between the old freight depot site (location of the restrooms) and where the caboose would go. The artificial tree, purchased from Longwood University for $500, can be put together in the holiday season and taken down.

If it doesn’t work well at the site, Spates advised, the town could always move it.