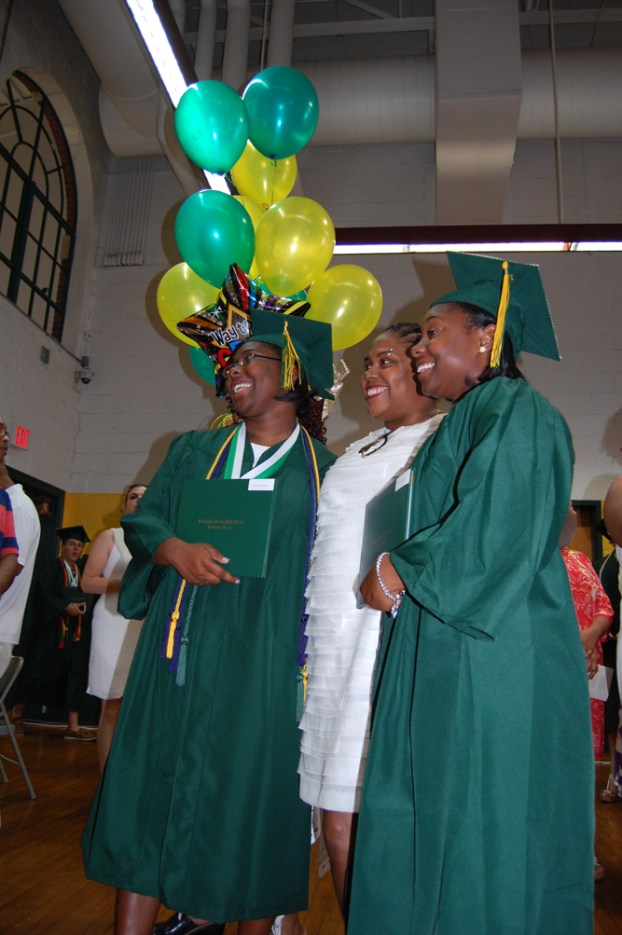 Sharing the happiness and excitement of her nieces, DaShanna (left) and DaQuinna (right) Toney, Tiffany Jones poses with the twins following their graduation in Buckingham Saturday. The two were among the over 130 graduates that received diplomas during the commencement exercises. (Photo by Jordan Miles)

‘A Legacy That Will Last:’ More Than 130 Graduate In Buckingham

The uniqueness of Buckingham County High School’s Class of 2015 was apparent Saturday morning as the former students and faculty members shared the graduates’ accomplishments and their exploration of uncharted waters during their four years at the school.

“We are what we repeatedly do,” said Senior Class President Cody Davis, quoting Aristotle. “Excellence, then, is not an act, but a habit.”

The quote was one that the seniors chose to represent them when they advanced from being juniors, after initiating the high school’s first anti-bullying campaign.

Davis said a veteran teacher told him that his graduating class was the strongest he’d seen since the 1990s. Attributing the fact to school faculty, Davis said his class also had more students with a post-high school plan than almost any before. “We’re making it happen,” he said, smiling.

Of the 130-plus graduates who received their diplomas Saturday morning, more than 30 graduated with honors, and 17 of them were awarded associate degrees or other college certifications. Seven of the graduates plan on actively serving in the military or reserves.

“Buckingham County is my favorite place on earth,” Davis said, assigning his reasoning to his classmates who sat in front of him, donning their green caps and gowns.

After quoting Albert Einstein, he said that his class was one of value.

High School Principal Rudolph Roethel, who is completing his first year as principal at the school, told the packed auditorium, “There is no more difficult task to say, perhaps, goodbye to a group of young men and women that I’ve come to cherish so very, very much.”

He called the graduates innovative, responsible, creative and compassionate.

“You have left a legacy that will last a long time,” he said.

Roethel noted that the three concepts he addressed with them months ago — respect, responsibility and rigor — were a direct result of watching them grow over the past four years, which allowed him to think of ways to move the high school forward.

The graduates, he said, were the first to be awarded associate degrees fully relying on in-house resources. “And I’m very, very proud about that.”

Division Superintendent Dr. Cecil Snead told the graduates they are needed in society.

“You have not failed to exemplify the foundation and the spirit that will carry you into the next steps of your journey in life,” he said. “You’ve demonstrated that you have the qualities to move us forward as a society. That is very important [and] I cannot overstate that.”

Salutatorian Marisa Robinson, who’s headed to The College of William and Mary, said she knew her classmates were excited, but nervous at the same time. “We are once again those same terrified eighth-graders, although a little more mature, looking into our unknown futures.”

Caitlyn Ragland, the class valedictorian, urged her classmates to learn from their mistakes, never give up, fulfill their purpose in life and have personal integrity.

“You have achieved something excellent by sitting in these seats today,” she said.

Following graduation, as the graduates and their families exited the halls of the school, walking into the sultry outdoors, the echo of their voices trailed, following them.

Not only did the former students leave an empty, silent school behind them, but they also left a legacy of hard work and pride that will linger for years to come.

Cumberland County Public Schools’ Teachers of the Year are educators who inspire the love of learning in all students, show... read more