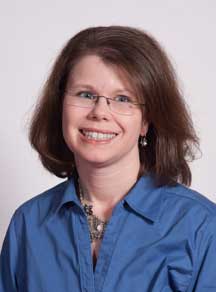 FARMVILLE — If Jennifer Bowen’s winning Virginia Tech’s 2015 Alumni Award for Excellence in Extension were the eye of a needle, then her triumph is threaded by those whose strands have become part of the tapestry of her life.

“I’ve just been really lucky. I’ve been in the right place at the right time multiple times in my career,” she said, with a smile you could hear. “When I was first hired everybody told me ‘Oh, you’re so lucky to be in Prince Edward. You’re so lucky to be in that office.’ And I thought, okay, they’re just being nice. But they were absolutely truthful. When I started, I worked with Alvin Thomas and Patsy Pelland and so I feel like I had the opportunity to learn from the best. And when I started we did three months of training in another office—you trained outside your unit—so I trained in Cumberland with Van Petty—wonderful. I mean, how lucky could you be to work with those three people?”

And there was a fourth strand, too.

“Before I started, Prince Edward and Buckingham shared a 4-H agent, Ruth Wallace. Ruth went full-time in Buckingham when I started in Prince Edward and she and I worked together a lot and I’ve learned so much from her. We really work well together,” said Bowen, whose Extension emphasis is youth development.

Wallace, in fact, was the one who nominated Bowen for the award. “She’s probably much more deserving than I am,” Bowen said. “I have been extremely lucky and just surrounded by really good people.”

Bowen has joined them—another really good person to surround others with caring instruction and her irrepressible good humor and infectious enthusiasm.

Especially the many young people she impacts through 4-H programs.

“This year we had sewing, which is really fun, and sewing is something that I have learned over the last few years as a helper in our after-school program. I learned to sew in 4-H,” she said, the ever-present smile on her face emphasizing how much enjoyment she derived.

Add programs such as the Clover Bud Science Lab for five to eight-year-olds (introducing them to scientific method), cooking classes and Junior Master Gardener and there is something everyone.

And something with a purpose.

“We do science enrichment  in the middle school in sixth and seventh grade and think the earlier we can introduce them to scientific method, and make it fun, the better,” she explained. “I think that’s been my favorite this year.”

“Making it fun is the key—yes, definitely…We try to do as much hands-on as we can, learn by doing,” she enthused. “I had to laugh at that sewing class because we definitely learned by doing. I learned how to change a needle. I learned how to wind a bobbin (she laughs again). I’ve learned all kinds of stuff.”

Before joining the ranks of Virginia’s Extension agents, the Longwood University graduate worked at the department of social services in Prince Edward for three-and-a-half years, first as a foster home recruiter, then switching over into foster care case management and child protective services.

Unsurprisingly, “I loved the people that I worked with in social services, but the situations that I saw were often very negative and so when this job came open I thought that this would be a really good opportunity to work with kids…That’s what drew me to it,” she said.

Bowen had some 4-H experience growing up in Halifax County but she said her husband, Stuart, also from Halifax, “grew up in 4-H and did everything you can do in 4-H and when this job came open he said ‘You have to apply.’ I said okay and so the rest is history.”

As with so much of what Bowen says, those words are also punctuated with another laugh more than with a period.

But don’t get the wrong impression. The delightfully upbeat Bowen is fully aware of the seriously important role 4-H plays in the lives of young people.

“I think the most important thing about 4-H is it gives kids opportunities to be with caring adults other than their parents. I get to watch these kids grow up. I’m at the point now where some of my first teen leaders are now graduating from college and getting real jobs and starting their own families,” she reflected, “so I get to kinda watch them grow up and see how they turn out. And I think just having that positive relationship with them, especially throughout those teen years, is important.”

Parents can heighten that positive impact through their own involvement.

“One of the nice things about 4-H is that it gives parents an opportunity to be involved in activities with their children and a great example of that would be our horse club and our livestock club. That requires a real commitment from the parent. And you can take that commitment as far as you want to,” Bowen said.

The livestock club leader is a 4-H parent.

The Junior Master Gardener leader is a 4-H parent.

And there are parents who just come and help wash dishes after cooking classes.

“If we hadn’t had two parents there I’d still be washing dishes,” she said, “but it really gives you the opportunity to pick something that you like—cooking or sewing or horses—and you have that involvement with your kids.”

Bowen also speaks from her own current experience as a 4-H-participating parent, driving her daughter back and forth to horseback riding.

There are even parents, she adds, who were 4-H camp volunteers when their children were at camp “and then continue to go after their kids grow up and go to college. We kind of joke around that it’s a life-time commitment, that once you go you have to go forever.”

Like the threads of lifetimes that enrich the tapestry of our own lives.

A Virginia Tech press release about Bowen’s award states that “throughout her career…Bowen has worked hard to develop and strengthen relationships with local schools, educators, parents and children in Prince Edward County and to implement programs designed to meet local needs.

“Under her leadership, 4-H programs have grown and become stronger. She is recognized as an outstanding educator and a leader among her peers, and the positive relationship she has maintained with local school systems has been instrumental in the growth of 4-H programs.”

Bowen’s take on her own award-winning contribution to the community?

“This is a great place to be,” she says, her smile shining. “I’m just lucky, real lucky.”

Words someone else will undoubtedly speak when they think about her strand’s impact on their own life’s tapestry.

Second booster available for some