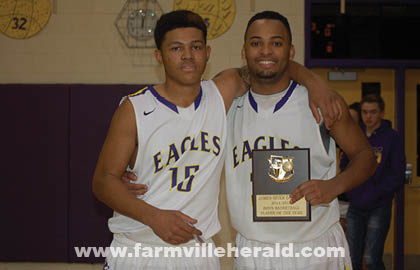 FARMVILLE — Two standout varsity basketball players are continuing to make news even after their season ended in early March.

Prince Edward County High School's Teequan Banks and Amonte Vaughan were recently selected for the Virginia Preps All-State basketball team. Vaughan was also named First-Team All-State for the Virginia High School League (VHSL), while Banks was named Second-Team All-State for the VHSL. Many fans may recall PECHS' star basketball duo both hitting the 1,000-point mark during their senior season. Vaughan was the first to hit the milestone, when the Eagles faced off against the Amelia County High School Raiders on Wednesday, February 4. Banks would join the 1,000-point club two days later on Friday, February 6, when PECHS hosted the Central Lunenburg Chargers.

With these honors, both members have been selected to play in the Virginia High School Coaches Association All-Star game hosted by Lynchburg College, as well. The game will be held on Monday, July 6 at 8:30 p.m.

After graduation, Banks plans to attend Lynchburg College and pursue a teaching career in physical education. He is undecided on playing college basketball in his first year because he would like to focus strictly on his academics as a freshman. Vaughan wishes to attend either Virginia State University or Virginia Commonwealth University for basketball. He plans to study sports management or sports education.