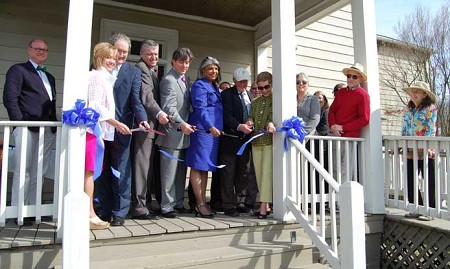 A dream, in fact, came true.

“This is the culmination of a long-term effort over the last 20 years we’ve made to own all of our office buildings,” VLAS Executive Director David B. Neumeyer said during the recent ribbon-cutting ceremony, “and Farmville was the last one, by a long-shot.”

VLAS is a non-profit law firm that provides legal advice, information and representation in civil cases to low-income persons in Central, Southside and western Tidewater Virginia. Headquartered in Lynchburg, VLAS also has offices in Danville and Suffolk.

“The practice is primarily one that is in support of families,” Farmville VLAS board member, Bill Shear, explained, “and that’s one of the things that make it so great and such an essential service. Most of the clients are children, elderly—people who really need help.”

An historic day made possible through a $100,000 matching grant from the Mary Morton Parsons Foundation, founded in 1988 to support the capital needs of charitable organizations.

A fundraising campaign to meet the entire match is underway and has already passed the $50,000 mark, according to Shear, who is heading the fund drive, along with his wife, Noelle.

VLAS’s new Farmville home provides plenty of space at a highly visible location, right across the street from the post office, with sufficient onsite parking, too.

The VLAS, Shear said, had been working out of its previous High Street office for a long time “in really cramped quarters, kind of tucked away, and they’ve been looking for a building for a long, long time. Finally—many, many turns, twists and mazes to be run—this building became available.”

Why did it take so long to buy a location in Farmville? The cost of commercial real estate in Farmville, according to VLAS. As a non-profit, there are not so many dollars to divert from the provision of legal services. But this deal came together and the grant sealed it.

“This is somewhat of a dream come true project,” said Rhonda Knight, Director of Development for VLAS. “I’m very pleased to have worked on it from the beginning through what will be the fruition of this project,” she said.

VLAS doesn’t charge a fee for its legal services. Clients are asked to pay only for expenses, such as court costs, medical record copies and witness fees, and they are usually small.

Eligibility is based on the number of people living in the household and their income and assets.

If someone’s legal difficulty is not within the areas covered by the VLAS, they may receive general legal information or be referred to another organization for help.

There is no doubt in Shear’s mind the capital campaign to gain full advantage of the Mary Morton Parsons Foundation grant will meet its mid-September goal.

The campaign committee, he said, is “really interested in making sure that we have justice for everybody…We’re going to be working very, very hard…and I’m absolutely certain that we’ll make it.”