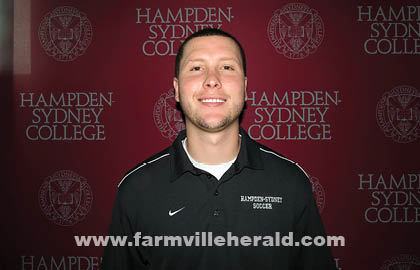 Slinka is a 2012 graduate of Wesley College and will complete his Masters in Education in May 2015. A four-year member of the soccer team at Wesley, he was named All-Capital Athletic Conference as a senior and was named team MVP and captain in his junior and senior seasons. Slinka was also a captain for the Wesley tennis teams in 2011 and 2012.

“Patrick is a great addition to our program as he will play a vital role in our mission to win Hampden-Sydney's first soccer ODAC championship,” said Head Coach Ian McMichael. “We look forward to his contributions to our program and to helping him continue to develop in his career.”

He has over five years of soccer coaching and training experience. He most recently served as the Assistant Men's Soccer Coach and Recruiting Coordinator at Wesley College from January 2013-March 2015. The Wolverines went a combined 16-18-3 in Slinka's two seasons on the sidelines. As recruiting coordinator, he helped bring in 30 players over two years. He also served as the fundraising coordinator for a new team locker room, coordinated off-season workouts, and worked on an enrichment program for student-athletes. Slinka also was an Academic Resource Center Supervisor at Wesley in addition to his coaching duties.

Coach Slinka was an assistant coach for the Bayshore Soccer Club where he assisted with the U15, U17, and U18 teams with three players from the U15 and U17 teams having trained with the U.S. National team. He was also a coach/trainer for the Cannon Soccer Academy and the Wolverine Soccer Academy.

A native of Sicklerville, New Jersey, he currently resides in Farmville. He is the son of Marilyn and John Slinka and has one brother, John.