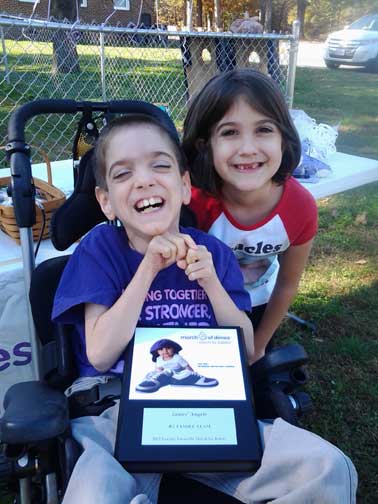 On April 26, at Centra Southside Community Hospital, thousands of families and business leaders will join together in the March of Dimes annual march for Babies—the nation’s oldest walk fundraiser honoring babies born healthy and those who need help to survive and thrive.

This year’s Farmville-Fulcher Ambassador Family is the Brazil family, whose story is an incredible one of determination and dedication. Their son James was born on January 24, 2002, only weighing one pound, five ounces. James spent three months in NICU and did suffer a brain hemorrhage due to oxygen deprivation in the womb. Because of this hemorrhage he has Cerebral Palsy and suffers from multiple seizure disorder, but the March of Dimes has been with him since day one. Their family has supported the March of Dimes since James’ mother, Angel, was a child herself and now they give back everything they can. Angel stated “I am a life-long supporter of this amazing organization.”

Henry Fulcher, well known in the Farmville community his voice on WFLO radio, will be the man of honor. Christine Martin, who passed in February, will also be remembered. She was an incredible volunteer that went door to door fundraising for the March of Dimes for 18 years. She participated in every walk along with her children and her children’s children. Christine’s daughter Peggy Emert has said, “I want to keep the tradition going.” She is out fundraising this year in memory of her mother.

On Sunday, April 26, registration begins at 1 p.m. with five-mile walk kicking off at 2 p.m. Participation in March for Babies includes a picnic, a DJ, a rock wall, children’s games, and dangers. To register visit www.marchforbabies.org.

The March of Dimes is committed to funding research to find the answers to problems that continue to threaten the lives and health of babies. For more than 75 years, moms and babies have benefited from March of Dimes research, education, vaccines, and breakthroughs.