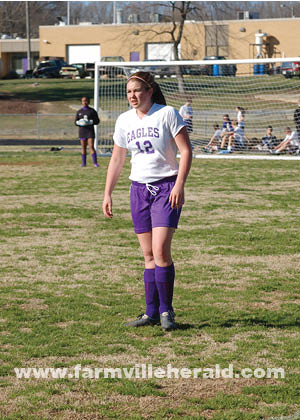 The Lady Eagles game saw a slow start, as each team only managed to score one goal during the first half. However, the second half would prove more exciting for the Prince Edward crowd.

Samantha Buczek had a hat trick and scored three goals during the game, while Kaitlyn McAbee scored two for the Eagles. Ka'Deshia Wright and Malaysia Messerschmidt also scored a goal a piece for Prince Edward.

“There were also strong contributions by Claire Utzinger, Denesha Harris, Meredith Brown, and Sophie Kocevar (on defense),” Hover went on to say.

The Lady Eagles varsity soccer team will return to action on Friday, April 17, when they travel to Altavista High School for a 5 p.m. game against the Colonels.

PECHS will be on the road for two more games against Parkview High School and Bluestone High School, before returning to their home field on Monday, May 4. They will play the Goochland High School Bulldogs on that day at 5 p.m.