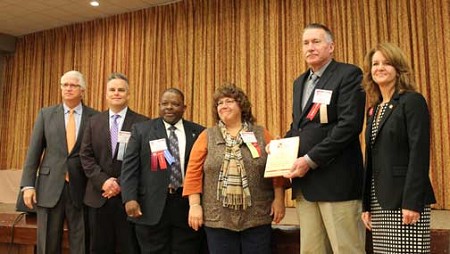 BUCKINGHAM — It pays gold to be green—in the sense of Buckingham Knights pride and in terms of being environmentally friendly.

Something Buckingham County Public Schools has, again, been recognized for.

The school division was recently achieved the second place award in the Virginia School Board Association’s (VSBA) Green Schools Challenge in the student population under 5,000 category, according to a news release from the association.

The challenge, states the release, is “a friendly competition designed to encourage implementation of specific environmental policies and practical actions that reduce the carbon emissions generated by both the local school division and the broader community. This is the sixth year the awards were given out.”

Buckingham County not only took home the second place award from the VSBA annual convention recently, but received a gold certification for achieving between 150-174 “green points” as a VSBA Certified Green School Division.

According to the release, certified divisions received their designations “by implementing new actions and adopting new policies…”

This is another feather in the division’s hat of environmental accolades. Last year, the division received the same second place award, but only achieved a silver certification.

“This is huge,” Division Superintendent Dr. Cecil Snead told The Herald following the award presentation. “In other words, we’re number two in the state…We want to be number one.”

Many of the practices identified by the award are part of the division’s comprehensive plan, he explained.

“…It shows the spirit of my faculty and my students. They’re the ones who work hard on this on a daily basis, and they made it happen,” he noted.

Of the actions listed in the challenge application, Snead noted the Carter G. Woodson Educational Complex being Gold LEED certified, the school’s maintenance and transportation complex being Energy Star certified, the work of the ecology clubs at the middle and high schools, the division’s anti-idling policy for buses, outdoor classrooms, harvesting rainwater for school community gardens, and developing a division-wide green committee.

“We have to prove what we do…We’ve had to make measureable accomplishments,” Ivan “Chip” Davis, the division’s director of facilities, told The Herald in an interview regarding the award.

Davis said that through measurable policies and practices relating to sustainability, the division has achieved energy savings.

“It’s…comprehensive [and] overall for the whole school system,” he said, noting the efforts of GCA, the school’s contracted custodial firm, and Honeywell, an energy efficiency contractor with the division.

Davis said the ultimate goal is for Buckingham to take the first place award in the state.