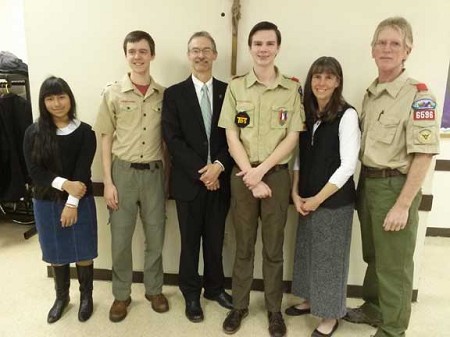 Jeremiah completed his Eagle Service Project at James River State Park where he helped produce an oral history of the families that owned and farmed the property that the park now occupies. He prepared a plan to complete the project, prepared interview questions, and scheduled and recorded the interviews. He supervised every aspect of the project including transferring the recorded interviews to disks and to a dedicated hard drive. Jeremiah also raised funds to purchase supplies, software, and the dedicated hard drive used by the Park to store the interviews.

Scoutmaster Dennis Jones presented the Eagle Award, the highest achievement that can be earned by a Boy Scout. During the Court of Honor James River Park Ranger Joanne Absher praised Jeremiah for his dedication to the project and announced that the interviews could now be seen by visitors to the Park. Jeremiah’s father, Deacon Mike Stinson, his grandfather, the Rev. Charles Stinson, and his brother, Cassidy Stinson (also an Eagle Scout) each participated in the ceremony.

The Court of Honor ended with a reception in the St. Theresa Catholic Church Parish Center.