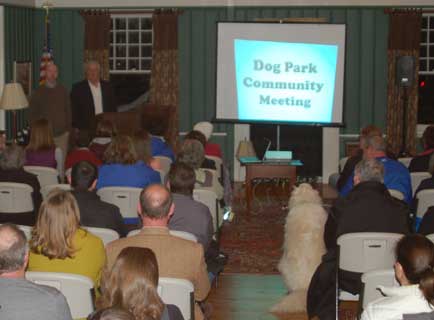 FARMVILLE — Every dog will seemingly have its day, and then some, in a town dog park.

Though attendance fell short of the targeted 200 mark, the enthusiasm Wednesday night filled the train station to capacity.

Pairet chairs council’s Town Assets & Resources Committee, which is responsible for analyzing and making a recommendation on the citizen-initiated project.

The Town is acquiring property on Virginia Street that adjoins a municipal lot near DMV and is poised to dedicate the two properties for a dog park.

When the City of Lynchburg recently held its preliminary dog park meeting, Dwyer said, 30 of that “much larger city” and metropolitan area’s residents showed up.

“I think it speaks well that we had, it could even have been 60 people turn out,” he said of the train station gathering. “They were completely enthused…There was not a negative comment….I think it was a fantastic crowd, in the fact that they were into it. The questions really showed the level of interest.”

“We had really kind of already decided that we’d already had enough interest, regardless of what we had come (to the meeting). We were going to proceed with it,” Pairet said.

Pairet had made it quite clear, with council members in thorough agreement, that citizen support was mandatory for any Town involvement with a dog park.

The question of “if” has been answered to the satisfaction of Pairet and other Town officials.

“There’s a lot of people very interested in the dog park,” he said.

Local veterinarian, Dr. Mark French, has already agreed to donate up to $10,000 for creation of the dog park, which leaves another $20,000 to be raised, organizers say, to make the project feasible.

The next step must see citizens establishing a 501c3 non-profit organization.

“Once they’ve jumped that hurdle, they’ve got to form a board (of directors) and meet with us,” Pairet said, “and we’ve just got to set down some guidelines.”

The town councilman said there were “a lot of positive ideas” offered from the community during last week’s meeting, with many volunteering their time and labor for the project.

“Actually, I thought the thing went fantastic as far as from the community side as well as the informational side,” he said.

Dwyer described Jake Milne, perhaps the lead citizen catalyst of the project and organizer of last week’s meeting, as “the perfect contact for this thing. He’s very articulate. He gets the fact, his quote, basically, was ‘The development of the park is marathon, not a sprint.’

“Obviously meaning,” Dwyer agreed, “it’s going to take some time to put together.”

But the dog park is going to happen, he believes.

“Without a doubt,” Dwyer said.

“Nothing came up that was going to be any hitch to further progress.”

“Oh, yeah,” he said when asked if the project was going to move forward, praising the level of citizen support.

“I appreciate the enthusiasm because I think that’s very important for a project of this kind, or any project, for that matter,” Spates said. “I think the public’s well-versed on it and they’re excited about the project.”

Like Milne, he is realistic about the fact a dog park is not going to show up overnight.

“It’s going to take a little while,” the town manager said. “They’ve got some things they need to do. I think they’ve got a good model from Lynchburg and I think that’s going to help quite a bit.”