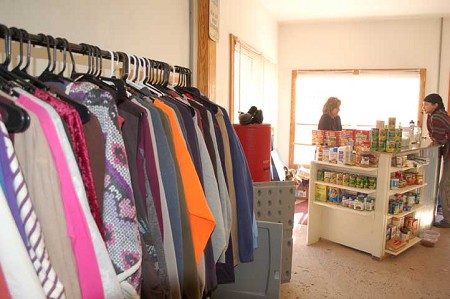 The Shop: A New Way To Serve Buckingham

BUCKINGHAM — There are three quotes on The Shop’s community page on its website: one by Mother Teresa, one by Gandhi, and the other isn’t attributed to anyone.

“We may not be able to do everything, but we can do something, and what we can do, we will do, by the grace of God.”

Though it’s not credited to them, it’s a concept that Shea Willis and her family embrace every day through their operation of The Shop, the blue-painted brick-and-block building on Route 60 in Buckingham, just outside of the court house village—one that’s been attracting the attention of those passing by and living in the area.

But the new color of the two-bay garage is not the only thing that’s enticing people to stop in or peer through their windshields.

“A Place Of Cars And Community,” reads the sign atop the building.

Inside a warm room adjacent to the garage side of the building are stacks of blue jeans, canned peas, stuffed animals, boxes of rice, and several blankets. In the corner of the room is a pot of chili, fresh bread, and a pie with plastic wrapped on top.

And it’s all there for the people and community of Buckingham that need it, absent of price tags and dollar signs.

“When somebody comes in the door, we’re like, ‘Here, go shopping,’” said Shea Willis, one of the operators of the family-owned venture.

“It’s pretty simple,” she told The Herald when asked how The Shop operated. “If you come through the door, we assume that we can help you in some way…The only hard and fast rule that’s here, and we explain this to everybody that comes in for the first time, is…simply just take what you need and leave what you don’t.”

It’s all free, she said, while standing behind a counter with several donation jars surrounding her.

The second rule, according to their website, is to pay it forward.

“Please think carefully before you take something. If you truly need it, it is yours. We share it with you gladly,” reads a piece of paper titled How It Works pinned the counter.

The sign advises people to only take what they need so that others may do the same. “If there are three cans of vegetables on the shelf, and your family can get by with one for dinner tonight, please leave the other two—you just put food on someone else’s table.”

The idea to have such a unique place came to Willis and her family when they began to rent the building, using it only as a garage.

“…As we were working on our cars…people kept stopping by…and saying ‘Can you do this for me?’ ‘Can you do that for me?’ So, we would do a little thing here and there,” she said, standing behind a small box of free laundry packs filled with detergent.

“We kept running into folks that just seemed to need a helping hand, you know…Somebody would stop by and say, ‘Hey, the mirror won’t stay up on my car, but I’ve only got five bucks, can I pay you next week?’ kind of thing. And we were like, ‘Gosh…Here’s an opportunity that we could help.’”

And they’re doing just that, helping people in need.

Willis, who’s employed as the owner’s representative at the St. Thomas Aquinas Seminary off of Ranson Road, noted that, in an effort to build community relations, The Shop purchases needed items to fill their shelves from the local thrift stores in Dillwyn and Buckingham Court House in an effort to curb competition.

“We know these [thrift store operators], and we were like, gosh, the last thing we want to do is undermine their ability…to have their income they make [with] their stores.”

The other items on the shelves, which include, a variety of clothes, non-perishable foods, coats, small household items, and much more, come from Willis and her family personally purchasing stock at stores and markets, along with community donations.

“Every once in a while, something will show up at the door while we’re not here. We’ll come in and there’ll be a bag of something at the door.” Everything donated and collected gets a thorough cleaning, she offered. “As long as it’s in decent shape, we’ll take it.”

Willis and her family don’t go to the extent of determining their neighbors’ need when they walk through the door. “We leave that up to the individual. And sometimes it’s challenging,” she cited, “Because, people will come in and want to take a whole lot of stuff. To that end, we offer some alternatives,” she explained.

“People come through and they’ll throw a dollar in…” she said, referring to the four glass jars on the counter, labeled food, kids, critical need, and whatever. The jars at the donation station, as the family calls it, are for money that goes towards a specific community purpose—not for the rent of the building or for shop utilities.

“Our spare change goes in there,” she noted, adding that she intends on putting more jars on the counter—including one for funds to plant a community garden behind the building.

In explaining why they established The Shop, the website says, “It’s so simple…It contradicts the way most everyone is accustomed to the way the world works these days…When did basic kindness and sharing become an institution where you had to PROVE that you were hungry enough or cold enough or sad enough before you were ‘eligible’ for someone to lend a hand? So—we decided to do something about it.”

Besides taking what they need, Willis says she wants people to feel like they were welcome when they leave the place. “I really do. I want them to feel like they can come back anytime without giving it a second thought…anytime they need something…”

The Shop, which is located at 13853 West James Anderson Highway, is open just about every day of the week.

“If you see the lights on or the door open, you don’t have to wait for it to be business hours [to come in],” she said, smiling.

The Shop is seeking donations of all kinds, from clothes to non- perishable foods, to serve the community.