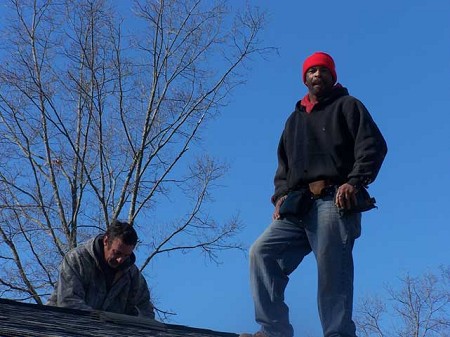 FARMVILLE — Farmville Area Habitat for Humanity is celebrating its 25th anniversary in 2015. The local Habitat affiliate has reason to celebrate. This spring will mark the completion of its 25th home in the Farmville area.

The local Habitat affiliate plans to celebrate in typical fashion — by continuing to work toward their goal of placing local families living in substandard conditions into decent affordable homes.

Their mission states: “Habitat for Humanity was founded on the conviction that every man, woman and child should have a simple, durable place to live in dignity and safety, and that decent shelter in decent communities should be a matter of conscience and action for all.”

A part of Habitat for Humanity International, the Farmville affiliate uses a simple formula to achieve this goal: “Habitat houses are sold to home partner families at no profit and are financed through affordable long-term loans. Mortgage lengths vary from four to 30 years, though most are around six to eight years. Monthly mortgage payments go into a local revolving fund to be used to build still more Habitat homes. In short, Habitat for Humanity is not a “giveaway” program.”

“Each Habitat affiliate is responsible for making sure we have the funds we need,” Johnson related. “Our funds come from payments on homes from the homeowners and the Habitat ReStore. The ReStore has really been a nice stable source of income for us.”

To keep homeowner costs down, Habitat relies on volunteers during the actual construction process. These volunteer workers also include homeowners who are required to contribute “sweat equity” on their homes as well as other Habitat constructions. “Home partners invest hundreds of hours of their own labor – “sweat equity” – into building their Habitat house and the houses of others,” the Habitat web page affirms.

Mark Jackson, homeowner of the “Anniversary House” which is scheduled for completion later in the spring, is no exception.

“I’m a single parent, and I have four boys,” Jackson related.

Habitat does not limit their homeowner education to construction skills. Each prospective Habitat homeowner is required complete a Homeowners Course that includes eight hour and a half sessions on a variety of home related topics.

“This is a curriculum that the Virginia Housing Development Authority approves and uses,” Johnson explained. “We start with how to budget.”

During the course, Habitat families learn how to track their expenses during the month.

“They save all their receipts for a month so they can have a good understanding where their money is spent,” Johnson continued. “Then we sit down with a list of ‘needs and wants’ and they select those things that are important.”

Credit is another topic in the Homeowners Course.

“We talk about how to manage debt and we discuss good and bad credit,” Johnson added. “We talk about payday loans and title loans.”

The importance of wills is another topic of discussion.

“We go over all the legal documents the homeowner will be presented with when the house goes to closing,” Johnson noted. “We want to make sure they understand what they’re signing.”

“The Town of Farmville and Prince Edward County have been great — they send officers to come and talk about how to be a good neighbor, security, and those kinds of things. That’s been very helpful,” Johnson added.

There is even a session on how to decorate on a budget.

“For each session we have a professional from the area come and discuss each topic,” Johnson explained. “We’ve had great response from the community in helping with that.”

At the end of the course the homeowner receives a certificate.

“It’s a big deal for them,” Johnson affirmed.

By the time a Habitat homeowner closes on a home, they have construction and maintenance skills as well as finance and legal knowledge. It seems fair to say that Habitat homeowners are among the most informed buyers in today’s housing market.

In addition to expanding homeowner services through educational courses, Habitat continually strives to improve its construction methods and projects.

“In 2007 we began building Earth Craft certified homes,” Johnson noted. “Habitat was the first builder in Prince Edward to build them.”

The executive director noted that the pre-Earth Craft homes generally have a $400 per month electric bill.

Another Habitat goal is to build homes that are low maintenance.

“Many of our families are single parent ones,” Johnson added. “They’re busy working and raising children — they don’t have a lot of time or money to spend on maintenance.”

Another facet of construction Habitat is exploring is rehab.

“We’ve been doing rehabs since 2009,” Johnson said. “With all the foreclosures during the big housing crisis a number of banks started donating their foreclosures to Habitat all across the country. We take neglected properties, rehab them, and put a family in that house. It helps the community and builds the tax base.”

The Farmville Habitat has rehabbed three houses in Farmville and is currently working on a rehab in Victoria.

“The Victoria rehab is almost finished,” she noted. “Volunteers from the Methodist Church in Victoria and other volunteers did the work. It’s in a very depressed area — fixing up that house will really help the neighborhood.”

During the past few years the Farmville affiliate expanded into the Buckingham area. The third Habitat house in Buckingham is currently nearing completion.

“Say we have a senior couple or individual on a very fixed income and they really need their front porch painted,” the Habitat director said. “We will have teams to go out and do those kinds of things to help more families and neighborhoods.”

“Help” and “hope,” are, in fact, two catch words that best describe Habitat and their presence in the Farmville community over the past quarter of a century.

Jackson is quick to affirm Habitat’s help — and the hope it provides for his family.

“Right now we live in a trailer in Rice,” the father of four stated. “The new house, it has four bedrooms!”

Jackson credits Johnson with guiding him through the homeowner process.

“Miss Jayne has helped me a lot,” said the soon-to-be-homeowner. “Thanks to the Good Lord — I’m so happy!”

On a recent workday, Jackson was at work on the roof of his house. The photo taken that day reflects Habitat’s promise fulfilled — a homeowner literally on top of his world.

“For most of our homeowners, owning a home was out of reach for them,” Habitat’s executive director concluded. “Habitat really does change lives.”