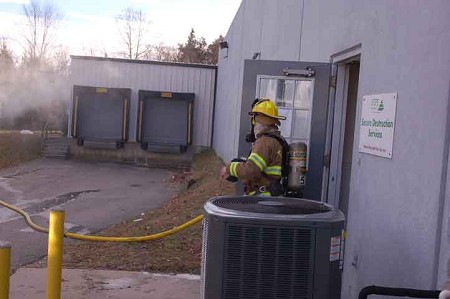 Area volunteer firefighters were called to STEPS’ Secure Destruction Services west of Farmville Wednesday afternoon and worked to extinguish a commercial paper shredder fire. Farmville Fire Chief Andrew Goss reported at the scene that the bale inside of the shredder was on fire. Everyone was able to get out of the building safely, he reported. Firefighters worked to vent the building, get all of the smoke out and to get the fire out inside of the bale. (Photo by Rob Chapman)