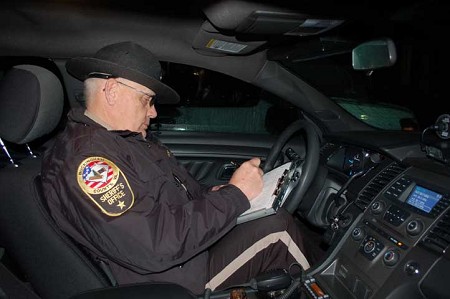 BUCKINGHAM — Ladies and gentlemen, the story you are about to read is true. The names, and road numbers, have been changed to protect the innocent.

This is the city: Buckingham, Virginia. I work here. I’m from here. I'm a reporter.

And I’m not, nor have I ever met, Detective Joe Friday, and I don’t ride through Los Angeles, California apprehending criminals. I do, however, know Sheriff’s Deputy D.L. Moody of the Buckingham County Sheriff’s Office. He’s a real person, and he recently let me ride along with him during one of his night shifts.

One with no Law And Order theme music, nor “Bad boys, bad boys, whatcha gonna do, whatcha gonna do when they come for you” lyrics. Real people being arrested. Real 80-mile-per hour speeds down Route 20. Real white knuckles on my hand.

I hurriedly got into Moody’s Ford Police Interceptor shortly after 6 p.m. on a Friday evening. We needed to ‘get,’ because there was a pending burglar alarm call a good ways from the courthouse. As we headed down the road, the sun was descending towards the horizon of the Blue Ridge Mountains—a sign of a looming bedtime for many, but not for Moody and me.

“Some do,” the James Madison University graduate responded when I asked him if many people waved at him as he traveled down the road, signaling their immediate friendship with the deputy as they sped. “Some don’t,” he smiled as we headed to the call.

Moody, who came to Buckingham after working over six years with the Albemarle County Sheriff’s Office, has been in Buckingham over three years as a deputy. As he told me about his studying psychology and criminal justice in college, his identification number, 214, was called over the radio.

“He marked on-scene,” Moody said of the deputy who got to the call first. “…He just cleared it with a malfunction,” he explained, referring to the alarm call.

As the roar of his engine quieted, another deputy asked to meet him at the Scottsville Bridge to confer about something, so we continued along Route 20.

Just a few moments later, his radio, located under the car’s dash—one busy with buttons, small lights, and devices—blinked, and the dispatcher’s stern tone followed.

As she began, “Buckingham to 213, 214…” Moody immediately began to slow the vehicle.

“Can I get you to respond…[to] a male that’s been assaulted by possibly three other subjects, apparently stabbed? The subjects are still on-scene.”

Within seconds, Moody whipped the Crown Vic around in the opposite direction of where we were headed. His blue lights followed, along with the wail of his siren, and speedometer readings of between 60 and 80 miles-per-hour.

As he drove, passing cars and turning onto back roads, he was concentrated and agile. Despite the roar of the engine, he could hear the dispatcher as she gave additional details of the call, including the address, and the names of possible suspects.

“There’s kind of basic parameters that we have, and it’s like, this call, [they] initially said stabbed…and the people are still on-scene. The alleged offenders are still there…[We] kind of step it up a little,” he noted regarding his response to the scene among the scream of the siren.

As we approached a vehicle that seemed reluctant to get out of his way, the tone of his siren changed. “That irritates me,” he said as he passed a slow-moving motorist who wouldn’t pull over.

As the hay and grass alongside the road bent with the speed of the vehicle, Moody was thinking of the quickest, most safe way to get to the scene, mapping it out in his head. As we heard additional information from the dispatcher, we slowed some, and the siren stopped.

“If they’re no longer on-scene and he’s denying rescue, it’s quarter to seven on a Friday evening, people are out walking, checking their mail, going for their evening walk after dinner, there’s really no need to continue to expedite,” he said as he stared through his windshield. He said there are certain times when you have to “push the envelope,” when responding to calls.

“You start handling a call as soon as you get it in your mind…” Moody said when asked about the thought process he has.

His car, which he’s logged over 110,000 miles on, would soon join two other deputies, four State Troopers, a rescue squad, and a man with a bloodied face on scene of the call.

As I sat inside of his car, Moody spent about 40 minutes conferring with the officers, speaking to witnesses, suspects, and the victim outside of a home. Eventually, Moody, along with another deputy, would each take one person into custody in connection with the incident.

Me, Moody, the suspect, and a silent car all proceeded to the sheriff’s office, where the suspect would be processed by another deputy. When we got to the office, both cars drove into a sally port, a large garage-like room that ensures secure entry into the office. The large garage door slowly shut behind us before Moody removed the suspect from the car.

“I kinda fell into it…” Moody said of his job as he got back into his car. “The Good Lord gave me the strength and the ability…You know, it’s a necessary job. It’s a job that has to be done. It’s not always an easy job, it’s not always a fun job…It’s something that, I assume, in a matter of faith and not having any other explanation, it was the gift that I was given. Everybody has something,” he explained as we headed back up Route 20 towards our original destination, the James River Bridge at Scottsville.

Once we got to the bridge, Moody conferred with another deputy and several State Troopers as they conducted traffic control while hundreds of people sought a place to park and stand to see the fireworks as dusk fell. The camaraderie was evident among the agencies; the men talked, and even laughed some as they swung their flashlights and pink glowing cones from left to right directing cars and trucks.

As we walked along the bridge following the fireworks show, several people spoke to both Moody and the others, asking them how their families were and how their nights were going.

“If handled well, you can leave a positive (impact),” Moody answered when asked how he handled difficult situations and calls as he walked cautiously alongside Route 20, headed back to his car.

After hours of standing in the road directing people and cars, the lawmen dispersed, and Moody and I got back into his Interceptor.

As we headed south on 20, just a few miles down the road, Moody got another call.

“214, can you check…[on] some illegal fireworks going on…plus a noise complaint. People [that have] got to go to work in the morning are complaining,” the dispatcher said.

As we got off of Route 20, we took several back roads towards a narrow, long, dark gravel road, where the complaint had originated. There was little light where a small group of people sat outside the house. Moody got out of his car, spoke to one or two of them for about five minutes, and got back in and drove off.

“One of my biggest…irritations…is when you’ll hear…on televised news…they use the word routine…There’s no such thing,” he said when asked about the potential escalation of a simple call into something major.

“‘I’m 10-4, spoke to the parties there…They were wrapping it up…’” Moody told the dispatcher.

He says it’s important to be able to talk to people and meet them on their level of understanding and comprehension of the situation. “They’ve got a right to have fun…Likewise, anyone else has a right to peace and quiet…” he added.

Minutes later, Moody was dispatched to a loud noise complaint near our location. As he slowed, looking for the block number and exact street address, he rolled his window down and turned his radio down, intently listening for any loud music or noise from the homes in the area.

After the call was unfounded, we headed back up Route 60 towards the sheriff’s office. It was just about midnight. The air had cooled by about 20 degrees since we started six hours earlier, and the moon shone brightly up above.

Moody had about another six hours to go, and me—well, I headed home to my bed, where the majority of other Buckingham residents were as the deputy and his colleagues would continue to patrol the roads and respond to calls.

No Dragnet trumpets sounded and no loud Law and Order gongs were heard as we parted ways.

I only heard the winding up of Moody’s Ford engine as he left the office, and headed towards his next call.