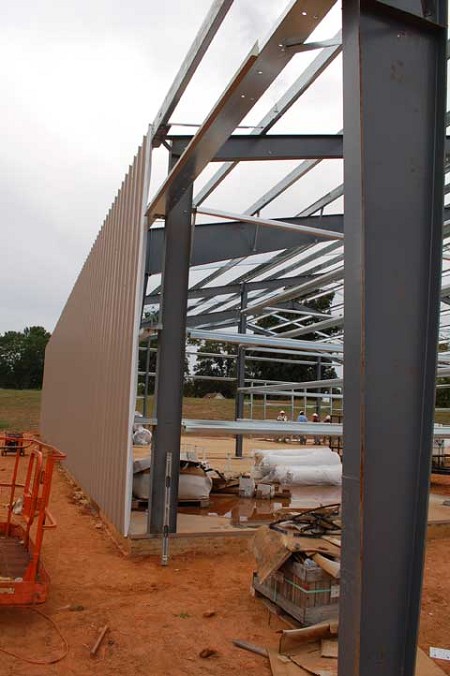 BUCKINGHAM — The Buckingham Cattlemen’s Association (BCA) is mooooving on up.

Literally, in the form of the construction of their Buckingham Agricultural Resource Network (B.A.R.N.) facility, located on Route 60, just west of Buckingham Court House.

And, come spring, the mooing will commence.

On the construction site, tall beams now stand on the foundation within the red clay.

“Things are finally starting to move right along…We’re getting ready to submit another grant proposal to the [Virginia] Tobacco Commission so that we can continue…We are hoping to get the spring-bred heifer sale in here in [April],” noted County Extension Agent Jennifer Ligon.

“It’s going to be used as a community center, basically,” she responded when asked the purpose of the building. “It’s where the Buckingham Cattlemen’s Association will house all their yearly meetings and activities. They’ll have their heifer sale here, and also load the cattle out from their feeder calf sale. It’s going to be available to the community and other agricultural producers…”.

According to Ligon, the Virginia Tobacco Commission has already allocated over $550,000 towards the project, and grants have been submitted to the United States Department of Agriculture (USDA) and the Virginia Department of Agriculture and Consumer Services. The project has also received support from the Buckingham Board of Supervisors, along with Appomattox and Cumberland counties.

The large open space in the building will be primarily for cattle events that need to be under roof, she explained, adding that ranch equipment will be available as well.

“It can be set up and taken down and moved around. The concrete area, of course, is the inside meeting room area where we’ll also have a kitchen. 4-H can have some of their activities there.”

While standing under the beams where construction crews were assembling the sides of the building to the structure, Roger Morris, the president of the BCA, said that the association was pleased with the progress that’s been made so far. He cited that the building will help members of the cattlemen’s association, and will also serve as a place for meetings and educational programs.

“This is our dream come true,” noted retired County extension agent and BCA member Jim Myers. “These guys don’t have to haul [cattle] to Lynchburg, they can bring them in here, we can do three or four loads at a time…It’ll be a whole lot easier for everybody.”

Myers agreed that the facility could also be used for 4-H activities.

“It’s definitely not a livestock market,” he stated. “We don’t operate on a weekly basis.”

According to Myers and Morris, BCA will oversee operations of the B.A.R.N. once completed, and it’ll be open for use by members of the community, and civic organizations.

The cattle pens will be removable in the open space area, Morris remarked, so other functions can take place.

Noting that plans are in the works to construct an indoor horse arena next to the B.A.R.N., Myers offered, “We’re doing it for the good of the people…[It’s] definitely a community facility.”

The two said that the idea of the building came about 15 years ago from the BCA, which was founded in 1974.

The building is set to be completed and open by spring 2015.

Each fall Cub Scouts and Boy Scouts across the country perform a service project called Scouting for Food. Scouts in... read more