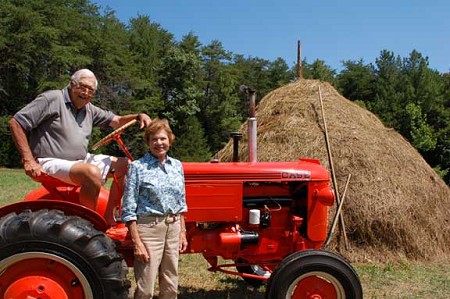 CURDSVILLE — It’s a sight that impressionist painter Claude Monet would have included in his 25 canvas series, called Haystacks, in 1890.

It would be a bad place to lose a needle.

It’s also a practice that was instilled into Harry Ramsey by his grandfather, just as his parents most likely taught him, continuing what has been done from generation to generation.

It’s an antiquated way of cropping hay, much more intensive and laborious than the air-conditioned John Deere tractor pulling a round hay baler back and forth across the countryside.

It’s a tradition that the retired Norfolk dentist and his wife, Mary, want to instill into their children and their grandchildren when they visit their High View Farm off of U.S. Route 15 South in Buckingham.

The mound of hay stands well over 10-feet tall, towering over his antique hay rake he uses to pile the crop.

There’s a detailed and intricate process that takes some time to create the stack, says Harry, who moved to Buckingham a few years ago from Norfolk, which involves cutting the hay, raking it, shocking it, piling it, and then, the most intensive part, stacking it strategically around a tall, wooden pole.

Once a solid base is established, then Ramsey uses a long topping fork to place the hay atop the base, stacking it neatly to support the heavy load.

“We do it one pitchfork full at a time,” Ramsey related, noting that the last time he built a haystack with his grandfather was in 1950 in Augusta County.

Loose stacks of hay are built to prevent accumulation of moisture and promote drying, or curing. In some places, this is accomplished by constructing stacks with a conical or ridged top.

The exterior may look gray on the surface after weathering, but the inner hay retains traces of its fresh-cut aroma and maintains a faded green tint. In other areas, hay is stacked loose, built around a central pole, a tree, or within an area of three or four poles to add stability to the stack.

One loose hay stacking technique seen in the British Isles is to initially stack freshly cut hay into smaller mounds called foot cocks, hay coles, kyles, hayshocks or haycocks, to facilitate initial curing. These are sometimes built atop platforms or tripods formed of three poles, used to keep hay off the ground and let air into the center for better drying. The shape causes dew and rainwater to roll down the sides, allowing the hay within to cure.