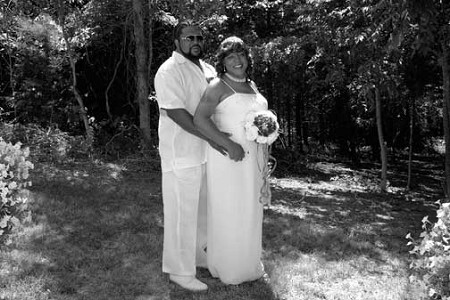 The wedding of Shalita Hope Walker, of Prospect, daughter of Gwendolyn Wise-Love and Cleveland Love, of Rice, to Jessie Wilson Jackson, of Prospect, son of the late Jessie L. and Adeline Hawkins Jackson, took place at the home of the bride’s mother in Rice on July 5.

The Reverend Wyatt Vaughan officiated at the double-ring ceremony.

Ushers were Alisa Vasquez, of New York, NY, and Kadedra Vaughan, and Shanika Dove, both of Farmville.

The bride wore a gown of ivory satin and carried a bouquet of red and white roses.

Ms. D. Yolanda Vasquez, sister of the bride, of Washingtonville NY, was maid of honor. Nannie Wise, sister-in-law of the bride of Albrightsville PA, Terri Jones of New York, NY, and Angel Miller, of Virginia, served as bridesmaids.

A reception followed the ceremony at the home of the mother of the bride.

After a wedding trip to New York, NY, the couple will reside in Prospect.

The bride is a 1984 graduate of Prince Edward County High School and a 2004 graduate of Manhattan Community College in New York City. She is employed as a certified jail officer by the Piedmont Regional Jail.

The groom, a graduate of Prince Edward County High School, is employed as a grill cook by Hampden-Sydney College.

On Monday, July 28, the Southern Delta Aquarids Meteor Shower will appear in the night sky and on Tuesday, August... read more