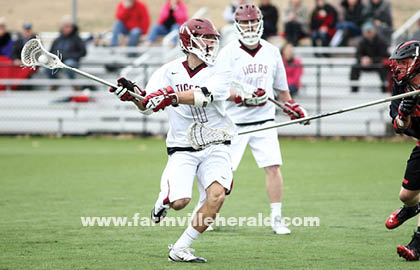 Abbot Wallenborn (Crozet/Western Albemarle) put the Tigers on the scoreboard first at 13:34, but Lynchburg's Harrison Brennan won the face-off, picked up the ground ball, and scored nine seconds later. The goal started a streak of five consecutive goals for Lynchburg, who led 5-1 with 8:38 left in the first quarter. Fleet Jernigan (Kill Devil Hills, NC/First Flight) found the back of the net at 7:51, but Lynchburg scored the next four and went up 9-2 with 11:18 to go until halftime.

The Tigers offense woke up from there, scoring the next three to trim the deficit to 9-5 at 3:03. Austin Stewart ended the Tigers run at 2:35, but Wallenborn scored again with 59 seconds left in the frame to keep it a four-goal game, 10-6. Hunter Thompson quickly answered the score with 47 seconds to go, but Thomas Armstrong (Charlotte, NC/Charlotte Latin) scored from a near impossible angle at the six second mark to make it a 11-7 halftime score.

Lynchburg scored in quick succession much like the first quarter, pocketing the first five goals of the quarter with 7:06 to go, leading 16-7. Duncan Morris (Charlottesville/Christchurch) scored in transition at 3:36, but Dane Angell posted a goal at 1:45 to keep it a nine-score game, 17-8, after three quarters of play. Hampden-Sydney scored five goals in the fourth, but the Hornets added four.

Hampden-Sydney ends the season with a 10-8 overall record.