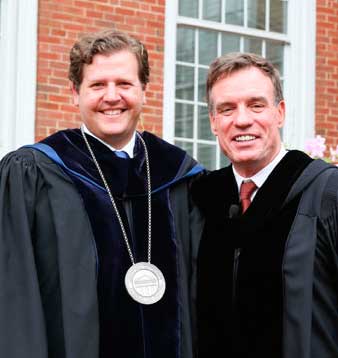 Don’t be afraid of failure.

Fulfill, with civility, the obligation you have to your community and nation.

And, Mark Warner told them, call your mother.

As governor, Warner traveled to Farmville every June to address the annual Girls State attendees and the first piece of advice was always front and center when he spoke to those rising high school seniors.

With Longwood graduates embarking on their careers, the words had, if anything, even greater traction.

Warner was the first member of his family to graduate from college and knew he’d have the opportunity to do things and go places that his parents only dreamed about.

Or never dreamed of at all.

Such as two utterly failed businesses and sleeping in his car or on a friend’s sofa.

So, when Senator Warner told graduates, “You have an obligation to strive, to reach, and to not be afraid to fail,” he spoke with a surprising degree of experience.

And gotten back up again.

“I was flat broke, living out of my car,” he said under clouding skies that would shower rain several times while the degrees were being awarded. “But you know what? I got a third shot…There was this brand new industry called cell phones. You all have grown up with cell phones…but my (Harvard) law school classmates were with all these fancy firms and I went to all of them in 1982 and said ‘There’s this new thing, cell phones, you ought to get involved.’”

If Warner, who signed the legislation designating Longwood as a university in 2002, was expecting gushing thanks and thrusting hands full of investment dollars, he was sorely disappointed.

“To a person, they said to me ‘Warner, you are so crazy. Who’s going to want a car phone? Get a real job,’” he said during W. Taylor Reveley IV’s first graduation as Longwood president.

His classmates are still practicing law. Warner went on to found Nextel and become a venture capitalist.

And then governor and a United States Senator.

“So take that chance,” he urged the 921 undergraduate degree recipients and the 156 receiving graduate degrees. Yes, there may be some failure “but be willing to dig yourself out and get back into the game.”

“Along with this education comes a responsibility to your community and to your country,” Warner offered as his second piece of advice. “You graduate in a time when our country’s political and policy debates are pretty intense. Now, I urge you to participate in our nation’s debates in a respectful manner because today we live in a nation that engages in way too much confrontation and not in enough conversation.”

People talking at each other, not with one another.

Or shouting, without bothering to create room for a reply.

“You turn on the TV and you only hear the loudest voices on either end of the political spectrum, who spend all their time simply criticizing the other side—it happens in both parties—rather than trying to offer solutions,” the senator lamented.

Educated citizenry is crucial and the man who was on the cutting edge of the cell phone boom marveled at how the graduates with their smartphones could access more information in the palm of the hands than their grandparents could during their entire lifetimes.

But there is the danger of becoming swallowed and self-absorbed by the technology.

“In this age of iPad and iPhone,” he said, for “more and more of us it’s harder and harder to look simply beyond the ‘I.’”

Underscoring the point, Senator Warner said, “While we’ve become better connected, we seem in many ways to be even more divided.”

But, he quickly added, “don’t misunderstand me: disagreement and rigorous debate about the big issues of the day and the challenges we face is both healthy and proper. But we should be able to debate these critical issues without questioning each other’s motives or our shared commitment to America.

“I’ve been in politics almost 20 years and I can tell you this—no one in politics, and I mean no one, has a monopoly on virtue, patriotism or the truth,” he said.

The senator, who faces GOP opposition in November, urged the graduates to “please, vote for rational leaders. I don’t care which party. But people who recognize it’s more important to be an American than to be a Republican or a Democrat.”

Torn bits of sunshine illuminated Wheeler Mall during the senator’s commencement address delivered the day before Mother’s Day and his advice to call mom drew smiles from the assembled graduates.

But Warner’s third piece of advice wasn’t linked to the holiday.

“I don’t just say that because tomorrow’s Mother’s Day. Call your mother, call your father, call your boyfriend, your girlfriend, your brothers and sisters,” he told them, as the clouds gathered grayer overhead. “After you get done with this ceremony seek out that special person, because you didn’t get here alone. Go up and tell them you love ‘em.

(During the commencement exercise, Dr. Sharon Emerson-Stonnell, professor of mathematics, received the Student-Faculty Recognition Award, which honors a faculty member for professional excellence and devoted service to students. Emerson-Stonnell, who joined the faculty in 1992, is a two-time recipient of the Maude Glenn Raiford Award. She is a former president of the Piedmont Council of Teachers of Mathematics and a recipient of its Outstanding College Teacher award.

PRINCE EDWARD — It is only a three-member committee of the board of supervisors, but if their recommendations are adopted... read more