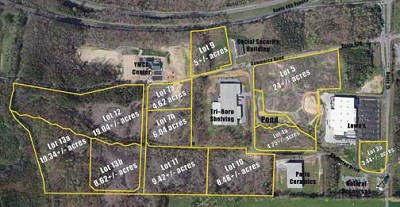 PE Has Lots To Offer

PRINCE EDWARD — The sale of 16-plus acres to the Virginia Department of Transportation doesn’t mean an end to the County’s business park development.

Prince Edward’s IDA has lots more lots available at its business park, located off of U.S. Route 15 South of Farmville near the Route 460 bypass.

The issue was part of the County board of supervisors’ work session on Virginia’s Growth Alliance earlier this month.

In addition to VDOT’s planned move of its Dillwyn Residency to the park, other residents include the Southside Virginia Family YMCA, Social Security offices and the County’s Natural Resources building, manufacturers Tri-Boro Shelving and Partition Corp., Tri-Boro Rack and Storage Products and Paris Ceramics, and retail magnet Lowe’s.

Prince Edward, collectively, still has about 10 lots of various sizes in the business park (see related graphic, page one) some with access to Commerce Road and Dominion Drive.

Several lots (7A, 7B and 10) have been cleared, pre-engineered and ready to locate a shell building—advance preparation can save about 30-45 days in the process.

Lot 7A, just under five acres, fronts Commerce Road; Lot 7B, at approximately six acres, is located directly behind it (and does not front an existing road) and is at a lower elevation.

While a winding Dominion Drive affords access to Lot 3A (which fronts U.S. Route 15 South) that is just under four acres, and lots 4A (just over four acres) and 5 (an estimated 24 acres) behind Lowe’s, not all of the properties are immediately accessible. An as yet undeveloped road that would access lots 13 and 11 and 7B would aid in that process.

Technically, the properties in the park have been transferred to Prince Edward’s Industrial Development Authority (IDA), but sales are coordinated with the County.

IDAs can buy and sell properties without declaring them as surplus. When property is transferred to the IDA, they serve as the developer for the county.

“The agreement we have is the County pretty much sets the price,” explained County Economic Development Director Sharon Carney.

Details like who is going to pay for the survey is often negotiated by the IDA.

In its role as a developer, an IDA also works to get properties ready for sale—tackling such issues as grading, surveying, and marketing. Any incentives are also run though the IDA.

“…And a lot of it is management,” Carney said.

So what would it cost for land in the business park?

“We’re not like a real estate firm that advertises a price,” cited County Administrator Wade Bartlett, when asked about the price of one piece of property in the past. “Our prices are always negotiable according to whatever business may locate.”

As far as a long-term vision, Prince Edward has some zoning plans in place. Lots close to the front of the park near Rt. 15, including lot 5, 4A, 3A, and a sliver of land on the north side of Lowes are already zoned commercial.

Carney cited at the board’s work session that they had pre-engineered lots with buildings in mind. Lot 10, she reported, will hold a 75,000-square foot building and it pushes into an adjacent lot 11, which she noted “you can flop it over and make it (the building) a 150,000 square feet easy.” Lot 11, hasn’t been leveled, but dirt has been stockpiled in advance.

But lot lines are not set in stone and can be adjusted to meet the needs of a prospective business.

DILLWYN — A $3,000 planning grant for a proposed Dillwyn Housing Needs Assessment Project could be on the horizon for... read more