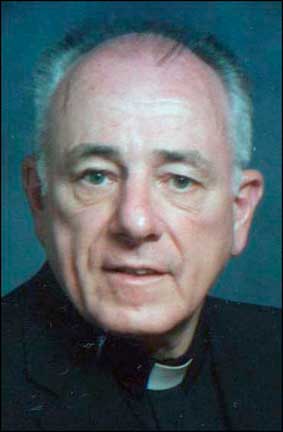 APPOMATTOX, January 28 — Reverend Robert James McEleney, of Appomattox, died Thursday, January 23, 2014 in Virginia Baptist Hospital. He was born April 15, 1928, in New York City. He was preceded in death by his parents, Mary Ann and Thomas McEleney.

In 1936, he traveled with his parents to their native Scotland. Because he had dual citizenship, he was drafted into the British Navy. After an honorable discharge he undertook studies at Campion House in London which prepared him to enter St. Mary’s University and Seminary in Baltimore. Upon the completion of theological studies in May 1958, he was ordained a priest for the Diocese of Richmond for service in the Roman Catholic Church. In post-graduate studies he earned a Licentiate in Sacred Theology, a Master of Education in Speech at the University of Virginia, a Master of Arts in Victorian Literature at Longwood University and Doctor of Ministry at St. Mary’s Seminary and University.

Father McEleney served in many locations within the Roman Catholic Diocese of Richmond including churches in the greater Lynchburg and Farmville areas. In his 55 years of ministry Father McEleney promoted and established Christian education in his assigned parishes. He leaves us to continue and to fulfill the challenge of Christian education in harmony with what Pope Francis is promoting as The New Evangelization.

A Christian Wake service will be conducted at 7 p.m., Tuesday, January 28, at Our Lady of Peace Catholic Church in Appomattox.

Please consider a donation of non-perishable food at both services, which will be given to the combined food shelf of St. Anne’s Episcopal Church and Our Lady of Peace Catholic Church. A similar distribution of food will take place at St. Thomas More Catholic Church.

Robinson Funeral Home and Cremation Service, Appomattox, is serving the family and an online condolence may be sent by visiting www.robinsonfuneral.com

NEW CANTON, January 28 — Ray Garnett Davidson, 77, of New Canton, went to be with the Lord on Friday... read more