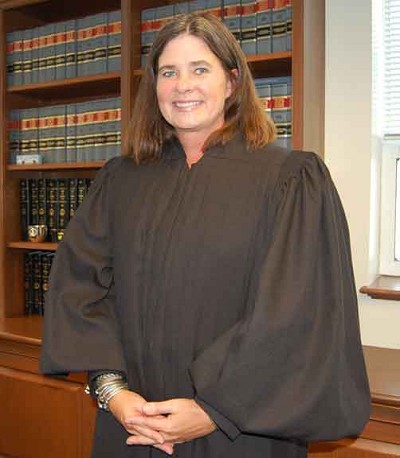 Judgeship Is A 'Public Service'

Surrounded by family, friends, judges, and elected and appointed officials from the area, White said she approaches her judicial responsibilities as a “public service.”

Speaking after taking the oath to those sitting and standing in the courtroom, White highlighted her family's belief in public service, citing her mother's delivering food for Meals On Wheels on Christmas, and throughout the year, and her uncle, Judge Frank Slayton, who served for years in the Virginia General Assembly.

She said her uncle's shoes would be the most difficult to fill.

The appointment of White was announced in August by Governor McDonnell, who released a statement then saying, “Kim has honorably served the people of Halifax County as their Commonwealth's Attorney for the last eight years.”

The Governor, whose Chief of Staff was among the gubernatorial office attendees on Wednesday, described White as “respected in the legal field” and a “highly qualified” individual.

A colleague praised her Wednesday as a prosecutor who sought justice rather than simply racking up victories.

Prior to being elected Commonwealth's Attorney in Halifax, White was a partner with the law firm of Woods Rogers in Danville.

The 10th Judicial Circuit's newest judge is a graduate of Mary Washington College (now the University of Mary Washington) and the Walter F. George School of Law at Mercer University. She is a frequent instructor on trial practice and is a past chair of the Virginia State Bar Committee on Lawyer Discipline.

White resides in South Boston with her husband, David, and their two children.

Having A Wheel Good Time

KEYSVILLE – It was June 21, 2011, and Bonnie Gilliam and daughter Julie Gilliam were in Roanoke for a James... read more