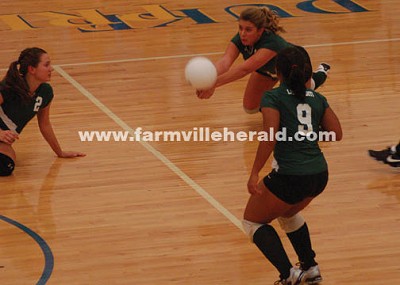 CUMBERLAND – The Cumberland and Buckingham High School volleyball teams staged their own “Battle of Route 60” on Wednesday night in Cumberland. The Dukes won 3-1 (25-22, 23-25, 25-23, 25-23), but in true “Battle” form, all four sets went down to the wire, with Cumberland earning the regular-season sweep over the Knights, as both teams work to avoid the eighth spot heading into the James River District Tournament.

“We didn't play our best, but it was a win,” said CHS head coach Heather Sutton. “This is one of the games we needed to win in order to improve our seeding for the tournament, and we were able to get it done.”

“It was definitely a better effort than what we had on Monday night,” said BCHS head coach Ethan Abruzzo, whose team lost to Central of Lunenburg in three sets (25-22, 25-15, 25-13) on Monday night. “We were flat on Monday night, and I do think we played with a lot more determination tonight. Still, in games that close, you can see where a blown chance here and one there could turn the entire match. For us, that was service errors. We had too many, and they came at the worst times.”

Cumberland took the first set 25-20, and held an early lead in the second, before Buckingham put together several strong runs. The Knights capped a 5-0 run on an ace by Maggie Vaughan to take an 18-12 lead. A powerful slam by Ivy Arbaugh started a 9-0 run by the Dukes. The Dukes held a 21-18 lead, but Buckingham answered with another run of its own – five straight points to retake the lead at 23-21. In a set that featured several large runs, the Knights were able to trade points with Cumberland to escape with the narrow two-point victory.

“I don't know why it's that way,” said Abruzzo when asked about the difficulty both teams had in breaking serves. “You think that after you control the pass, it becomes your advantage, but it doesn't always seem to work that way. We look to get on the attack as fast as we can. The only teams that can score points when giving free balls are the ones that almost never give free balls.”

The final two sets were as close as the scores indicated. An ace by Arbaugh gave the Dukes a 14-12 lead, but Buckingham battled back with a 4-0 run to take a 16-14 lead. The Knights got help from two underclassmen, sophomore Samantha Baird and freshman Ashley Hellerstedt, who registered a kill and an ace, respectively, during the run.

Cumberland finally wrestled the serve away from the Knights and went on a run of its own with seven straight points off the serve of Mackenzie Parker, who managed to register one kill during the run from behind the line to give the Dukes a 21-16 lead.

Buckingham chipped away at the lead, and pulled to within two points at 23-21, and to within one at 24-23 on an ace by Tyshell Chambers, before the Dukes were awarded set point on a service error.

Buckingham scored three straight points to pull back to within two points at 16-14 in the fourth set, before Cumberland took its largest lead at 20-14 on an ace by Arbaugh.

Fatigue became apparent on the part of both teams, as the two traded errors over the balance of the set. In all, five of the last eight points were awarded on service errors.

“They forced us to make mistakes,” said Abruzzo. “That, in addition to the mistakes we made on our own really hurt us. I saw some good things, but it's mainly the little things that get us. Big mistakes cost the same as small ones.”

“Coming into the week, we set a goal to win three of our final four games,” said Sutton. “We lost to Goochland on Monday and won tonight, and we have Amelia and Nottoway left. That's an attainable goal, and we need those last two to be tournament ready.

“We've been close all year, and I see it in practice. We've worked hard all year, but this is the time where we have to show it on the court. If we can end the regular season with three wins, it will send us into the tournament on a high note for the first time in a long while.”

FARMVILLE – It hasn't been the season that the Fuqua School volleyball team would've wanted coming into the season, but... read more