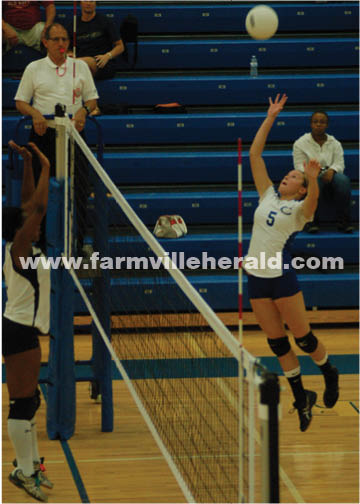 CUMBERLAND – On Monday night, the Cumberland High School volleyball team continued its struggles as the Dukes lost to Nottoway. On Tuesday, they lost the volleyball.

Not happy with Mondays result, and for the most part, how the season had gone to that point, CHS head coach Heather Sutton took the ball away from her team. It was a gamble that could've resulted in losing the team for the rest of the season, but that turned out to be far from the case. The Dukes rallied around one-another and looked like an entirely different team in a 3-0 (25-15, 25-23, 25-19) shutout of Randolph-Henry on Wednesday night at home.

“Finally,” said Sutton. “Last week, I gave them a challenge that if they didn't meet it would result in, for the lack of a better word, a punishment. They met it, but then fell apart on Monday. The girls were blaming one-another. They were really starting to become unglued, so they didn't touch a ball for the entire practice on Tuesday. We did nothing but conditioning.

“They came together as a team [on Tuesday]. I never have been so proud of them. Until tonight.”

The Dukes wasted no time in getting on their guests. A spike delivered by Cassie Martin that wasn't handled by Randolph-Henry, followed by a Norma Duncan ace helped the Dukes to a 15-7 lead.

Cumberland was never seriously challenged in the set. Randolph-Henry got as close as 19-14, but a powerful spike by Ivy Arbaugh, which she followed two points later with an ace, gave CHS a 22-14 lead.

The two teams traded points for much of the second set. A vicious spike by senior captain Mackenzie Parker gave the Dukes an 11-9 lead, and Cumberland then moved out to an 18-13 advantage on a kill by Kamren Gilliam, but Randolph-Henry kept things close.

CHS slowly built a working lead of 13-7, before Randolph-Henry rallied to pull to within a point at 15-14, and to within two at 19-17, but, much like in the second set, the Statesmen were unable to pull ahead.

From there, Cumberland scored two points for every R-H point, and went on to score their first 3-0 victory of the season.

“These girls are volleyball players. They're not basketball players or track athletes who happen to play volleyball,” said Storrie. “It hurt their pride for them to lose the volleyball, and they came together to try to get it back. It worked.”

It worked for one night, at least. Cumberland will travel to Central of Lunenburg on Monday, before returning home to host Bluestone on Wednesday night.

“These things can be day to day,” said Storrie. “But I think they're starting to realize what it takes, and what they have to put in for us to win.

“They even requested that we start every practice with fitness. If we work hard for 20-25 minutes, then we'll get the ball out, and if they don't we'll do what we did on Tuesday. They want to earn their volleyball each time out.”