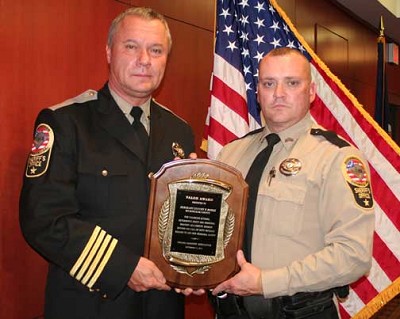 BUCKINGHAM – Stephen P. Bodek, a deputy sheriff with the Buckingham County Sheriff's Office, is the 2012 recipient of the Valor Award, a distinguished honor presented by the Virginia Sheriffs' Association.

The letter Kidd submitted nominating Bodek offers details of the September 1, 2011 call that led to the award.

Around 7 p.m. on that day, the 911 Center received a call regarding a complaint about a man with a gun. According to Kidd, the caller, the subject's sister, said the man was waving a gun around and threatening everyone in the home.

Sergeant Bodek and fellow deputy Erik S. Bryan responded to the call. When they arrived at the scene, they tried to get the subject to come outside and talk with them but he refused, wrote Kidd.

“As the deputies approached the screen door, with Bodek in the lead, the subject shouted obscenities and backed further into the house, through the living room back toward the kitchen,” reported the sheriff.

“While backing up, the subject refused orders from Bodek to show his hands and began reaching into the small of his back,” continued Kidd.

Although the deputies continued to tell the subject to show his hands, he did not comply and, according to Kidd, the deputies then tried using their Tasers but were unsuccessful.

“The subject went into a crouching position and Bodek saw him bring a black and silver pistol up into a firing position,” explained Kidd in the nomination letter.

“Bodek yelled 'Gun' and pushed Deputy Bryan to his right and drew his service weapon,” continued Kidd. “The subject then fired one round and Bodek returned fire…”

According to the sheriff, at that point the subject disappeared around the doorway. Meanwhile, Bryan, grasping his left side, advised Bodek that he had been hit.

Responding, Bodek yelled for Bryan to 'back out,' wrote Kidd. “Bodek then pushed Deputy Bryan out the front door and yelled for him to get to the vehicles and take cover. Bodek then ushered the other family members out of the house…”

Continuing, Kidd wrote, “Deputy Bryan attempted to use his portable radio to call for help but the radio was inoperable.” Later, it was discovered that the portable radio, which was initially clipped onto the side of Bryan's belt, had stopped the bullet the subject fired at the officers.

“Bodek then radioed 'shots fired, officer hit, send rescue,'” stated Kidd, adding that Bodek checked Bryan and although he did not see any blood requested that rescue “step it up and requested another squad because he was sure that the subject had been hit.”

Troopers with the Virginia State Police arrived at the scene to help provide assistance, added Kidd.

About that time, the subject's spouse who was told not to go back into the house, ran back in and repeatedly came out to the porch telling the officers that her husband was hurt and needed help, explained Kidd in his letter.

After several appeals from the officers to have her husband throw out the gun, the woman eventually brought out the weapon, reported the sheriff.

When the troopers and Bodek entered the house, they “found the subject face down in the kitchen…,” wrote Kidd. He added that at that point, Bodek was advised to back out and the State Police took over the investigation.

In the nomination letter, Kidd shared, “Upon my arrival at the scene, I found Sergeant Bodek and ascertained his status. I then checked on Deputy Bryan who was visibly shaken. Deputy Bryan stated to me that he wanted me to know that Sergeant Bodek had saved his life.”

He added, “Mr. Wright found that 'Sergeant Bodek could reasonably fear, under the circumstances as they appeared to him, that he and other members of the public as well as his fellow officer were in imminent danger of bodily harm and he used no more force, under the circumstances that appeared to him, than was reasonably necessary to protect himself, the other members of the public and his fellow officer from the perceived harm.'”

After describing the sequence of events that unfolded on that night, Kidd wrote, “Sergeant Bodek is no stranger to stressful situations. He has distinguished himself in battle in Iraq as a United States Marine. He is the recipient of a Purple Heart and the Navy and Marine Corps Commendation Medal with Combat 'V' (for Valor).”

While talking to The Herald about the VSA honor, Bodek emphasized the “team effort” demonstrated on that night.

Similarly, when asked about his military awards, he credited the team effort of his cohorts, an effort Bodek explained is documented in Patrick O'Donnell's book We Were One.

The book chronicles the Marines of the 3rd Battalion, 1st Marine Regiment, which included Bodek, in their fight for Fallujah. At that time, he was serving as a Combat Engineer Squad Leader.

Offering that he is not an awards kind of guy, Bodek stated, “I did my job-that is the way I look at it.”

Bodek, expressing his appreciation for Sheriff Kidd, said. “You couldn't ask for a better boss.” He added, “It is great to have a department that stands beside you.”

Reflecting on the award, he shared, “I am humbled by it.” Reiterating his team effort philosophy, Bodek added, “I want it to show that we have some great deputies here in Buckingham.”

However, for Kidd and the VSA committee that chose this year's recipient, the award is about one deputy sheriff, Sergeant Steven P. Bodek, who went beyond the call of duty.

Presented to Sergeant Steven P. Bodek, Buckingham County, for Valorous Actions, Determined Spirit and Personal Bravery as a Deputy Sheriff beyond his Call of Duty without Regard to his Own Personal Safety. Virginia Sheriffs' Association. September 11, 2012.

PRINCE EDWARD – And now there are five. Friday, October 12 was the deadline for candidates to file for the... read more