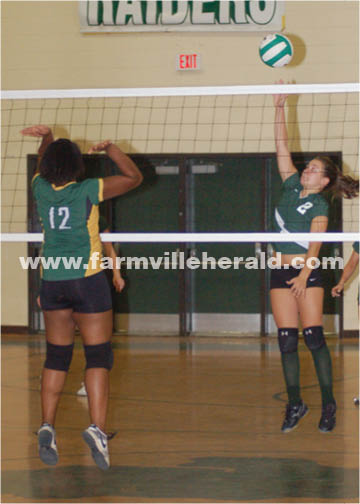 AMELIA – Given their overall youth and inexperience, the Buckingham County High School volleyball team knew that the 2012 campaign had the potential to be a long season. With just one senior, Rachel Meek, and only three players back from last year's varsity squad, growing pains seemed likely.

Monday night, the Knights experienced more pain than pleasure, but as with any team that considers itself to be in a rebuilding phase, head coach Ethan Abruzzo found some signs of what could be down the road in their 3-1 (25-11, 25-23, 24-26, 25-12) loss to the Raiders on Monday night.

“We had a lot of mistakes and physical errors in the games we lost big, and in the ones we played tight, we didn't have those same mistakes,” said Abruzzo. “It sounds simple, but it's that simple. Our biggest thing is that we can't continue to spot other teams a lead and allow them to win big. When you do that, it's like you lose more than a set.”

After falling 25-11 in a set that included very few offensive statistics for the Knights, BCHS managed to keep the second one close. A kill by junior Robyn Davis and an ace by Samantha Baird on back to back plays tied the set at seven apiece. Buckingham took a lead on consecutive points by Tyshell Chambers and Davis.

Amelia edged ahead and held a 17-15 lead that forced Abruzzo to call a time out. BCHS forced a tie at 18 apiece. Amelia rattled off three more points, before Buckingham's second time out. Again, the Knights quickly closed the gap. A little dump over the net by Savannah Gough drew BCHS to within a point at 21-20. An ace by Chambers forced a tie at 22 apiece, but Amelia scored three of the next four points to claim the close victory.

The third set went much like the second. The two teams traded the lead back and forth several times. Amelia worked its way out to a four point lead midway through, and was ahead 21-15, before Buckingham began to rally. A spike by Chambers proved to be too hard for Amelia to handle. That sparked a 5-0 run for Buckingham. Chambers served two aces in the run, and Baird registered a kill, before Amelia broke BC's serve.

The Raiders put together a little run of their own to take a 24-21 lead. A service error by ACHS gave Buckingham one last chance. With no room for error, freshman middle hitter Ashley Hellerstedt looked more like an upperclassman with three consecutive aces to give BC the lead at 25-24, and the Knights took the victory on an Amelia return that went out of bounds.

Amelia regrouped in the fourth set and quickly set the tone. The Raiders jumped out to a 15-3 lead. Buckingham closed the gap to 10 points at 16-6, but couldn't get any closer. Down 21-8, the two teams managed to trade service errors on five of the next six points. Hellerstedt regained the serve with BCHS down 24-10, but despite two kills, by Davis, the deficit was too much for BC to overcome.

“For the first time in eight years, I can't say that I have a player with a powerful swing that can kill the ball,” said Abruzzo. “We're more of a finesse team, which makes it difficult, as there is room for even fewer mistakes. Right now, we don't have a dominant force on the front line.

“That's why I brought Ashley up from the JV. She has the height we need, and when she develops confidence, I think she'll give us more power on offense. We brought her up to play, and in that do-or-die situation in the third game, she came up with three big serves. I think that will go a long way toward her developing confidence at this level.”

Buckingham played at Nottoway on Wednesday, and will host Randolph-Henry on Monday, before traveling to Central of Lunenburg next Wednesday.

It may have come two weeks later than desired, but the Fuqua School football team got its delayed season off... read more