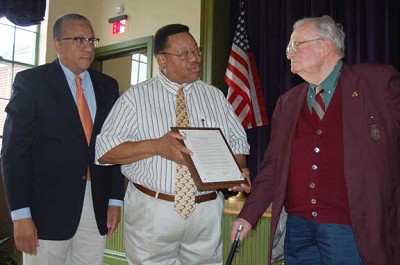 The Robert Russa Moton Museum honored the man affectionately known as “General Sam” on Monday “for his efforts and achievements to establish moral and social respect and dignity for all citizens of Prince Edward County.”

Retired United States Army Lieutenant General Samuel V. Wilson, of Rice, was presented a framed resolution and the museum’s Honoring General Sam Fund was established to support the installation and maintenance of the newly rededicated American and Virginia flags at the museum.

The flags are intended, the resolution notes, as a “living testament to the patriotism, leadership and service” provided by Wilson, who served on the museum’s board of directors and was its president from 2000 to 2002.

Wilson responded graciously and provided an American history lesson that began with the arrival of slave ships to Jamestown in 1619 “beginning a history of which we here are a part, but which we didn’t write-a history of enslavement and oppression which was to continue another 250 years and vestiges of which we still see today,” he said.

If time and history are tides, every generation, every person is able, and faces the choice, the duty, of choosing how they will swim in relationship to those forces-with or against the pull of their gravity.

Becoming another ibid in somebody else’s footnotes or writing a new chapter entirely, redirecting history’s continuing momentum toward the place where our better angels would guide us.

Wilson, former president of Hampden-Sydney College, would emphasize in closing that “we are indeed a part of a history we did not write, but we are writing its new pages today and tomorrow and the day after. And we remember the words of Omar Kayam: The moving finger writes, and having writ, moves on…Nor all your piety and wit can lure it back to cancel half a line, nor all your tears wash out a single word of it.”

Shackles and chains can be broken but they cannot be erased.

Neither, however, can the keys forged by those who work to open them and free the souls who were so bound.

“So we pause here,” he told those assembled, “for a brief smidgen of time this morning to remind ourselves that all human beings are created equal.

“This,” he said of those words on the nation’s birth certificate, “we must salute and defend.”

Wilson was able to provide a unique perspective because Robert Russa Moton grew up in the household of Samuel Watkins and Lucy Lockett Vaughan. “Perhaps his closest friend during his boyhood years was their son and my grandfather, William Lockett Vaughan,” Wilson said.

It was his great-grandmother, Lucy Lockett Vaughan, who helped teach the young Moton how to read, write and, Wilson said, “manipulate Arabic numerals. Her caring example of helping a young African-American boy under strained circumstances has had an indelible influence on my thinking over the years about the ideals which we all must work to protect and sustain.

“In that light, it is the image of Lucy Lockett and others like her, white and black, extending the caring hand to the disadvantaged and promoting the rights of the downtrodden that I see as we gather here,” he said. “It is they whom we must celebrate as we continue our efforts to advance the cause of individual freedom, equality and social justice.”

The museum’s resolution noted that as president of H-SC Wilson was the driving force behind the widely acclaimed 1999 symposium “Prince Edward Stories: Race, Schools, America.” The groundbreaking event demonstrated the issue of race and the county’s history could be discussed in an honest and healing way.

During his years as museum president, and the years following, the resolution states, Wilson has continually supported the Moton Museum’s mission to “preserve and positively interpret the history of civil rights in education, specifically as it relates to Prince Edward County and the role its citizens played in America’s struggle to move from a segregated to an integrated society.”

Reflecting on America’s history, Wilson noted on Monday the “true paradox” and “baffling contradiction” that saw the slave ship ripples wash up against those words of Thomas Jefferson about God creating us all, creating us equal, with equal rights under the law, equal opportunity in the workplace and “equal freedom to choose and work out our own destiny.”

Moton, Wilson observed, “arguably Prince Edward County’s most famous son and one of the big three African-Americans in the history of education in this country, lived his entire life under the shadow of this paradox…But Moton, whose efforts on behalf of his fellow man we recognize and celebrate by affixing his name to this small triangle at the junction of Griffin Boulevard and Main Street, succeeded in transcending, in rising above the paradox of slavery in a supposedly free society.”

Moton would leave Prince Edward County, Wilson noted, “as he moved through the corridors of power around the world, serving as advisor and counselor to five US presidents and making monumental contributions in the field of education.”

But he would return from time to time to visit his boyhood friend, William Vaughan, in Prince Edward County.

“These visits were happy occasions as Robert Russa was viewed practically as a member of the Vaughan family. At mealtimes,” Wilson said, “he would sit at the head of the table so all could see and hear him tell of his activities and adventures.”

They broke bread together, finding communion.

History’s ship of chains receding on their human tide.

“No one knew better than he,” Wilson said of Moton, “that it was never intended that we be a divided community, but that we live together in a spirit of harmony and mutual respect.”