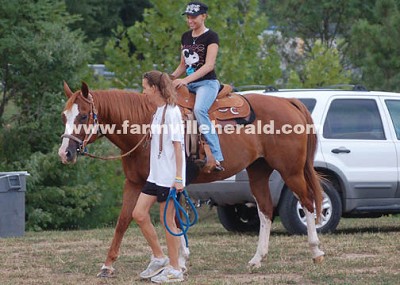 CUMBERLAND – When the Cumberland High School football team spills out onto the field for its home opener against Appomattox on Friday night, they'll do so with some added horse power – and a lot of inspiration.

Cumberland junior Mary Huddleston will ride her horse “Spinner” onto the field in front of the football team Friday night.

She's both a typical and an extraordinary kid at the same time.

Typical in the sense that she just wants to do some regular kid things, and be part of the teams at her high school.

Extraordinary, because she has already faced and twice beaten back something that can take down many adults. Bone cancer.

“When I was in fifth grade, I was diagnosed with cancer,” said Huddleston, who talked about her challenges with maturity well beyond her years. “It was a rare form of bone cancer [Osteosarcoma]. I had a softball sized tumor in my hip.”

Huddleston, who will celebrate her 17th birthday in October, underwent a year of chemotherapy and a course of radiation. A right interior hemipelvectomy saved her leg, but took a good sized portion of her hip.

She recovered and remained healthy for three-and-a-half years. She played basketball, and was good enough to make the varsity squad as a freshman.

“I remember the day,” said Huddleston on when she found out that the cancer had returned to her other hip. “February 22. It was our last game of the season.

“They say if you can get past five years, you're pretty much safe. I was in remission for almost four. Then they found a ping pong ball sized tumor in my left hip. The same kind.”

Again, she was in a fight for her life. Basketball was no longer a concern.

“I had worked so hard over the summer leading up to the season, and I made the varsity,” said Huddleston as she brushed a fly off of Spinner.

In addition to having to face cancer, and all the things a kid shouldn't have to experience all over again, she also took a stem cell transplant back in May.

All is well, so far, and her blood counts are back to normal.

“It was three weeks before the end of school. It puts a strain on your immune system, so I didn't go out much over the summer, and when I did, I wore a mask, so I'm really just getting back to where I can do things.”

Perhaps the only thing more cruel than a child having to face cancer, is being the parent of that child.

“It's hard to watch your child go through something like that,” said Huddleston's mother, Amy. “You have to see the pain and the sickness. The worst is not knowing if they're going to survive.

“But she's taught me so much in life. There are those days when you get up and you don't feel like you can go to work, or something like that. Then I see her or think of her, and what she's going through. Then, I think, 'yeah, I can go to work.' She motivates me.”

Through it all, Mary has had support from her classmates, the school and her family.

“Mary got Spinner when she was five. Spinner was four.

“That's her boyfriend,” said Amy of Spinner. “When she was first diagnosed, every day she would want to go see Spinner. No matter how terrible she felt, she was determined to go see her horse.”

Amy tells a story of the time after one of Mary's treatments, she asked the doctor when she could get back on her horse.

“He said not until she could lift her foot up to the stirrup. I'm sure he meant it as a soft way of saying 'not right now' and give her a goal, but it was the wrong thing to tell Mary. She was out there trying the next day and managed to lift herself onto Spinner.”

“I've pretty much been ridding since I was a baby,” said Mary. “It's peaceful. Spinner's my favorite. Sometimes people can look at me and tell that something's wrong. Not in a mean way, but they can see that I walk with a limp, or something like that. He's non-judgmental. When I'm having a bad day, he knows and he'll be extra patient, or extra gentle with me.”

Her last bout with cancer inspired her to go ahead with an idea she's had since middle school, but has sat on until earlier in the year. To her delight, everyone was in support of her idea to lead the team onto the field atop Spinner.

“We asked the superintendant, and she was very supportive,” said Mary. “My grandmother made the costumes we'll wear. I want to do something fun. Something that can liven things up at games.”

“She's been talking about it since the fifth or sixth grade,” said Amy. “Finally, last year, she went to Dr. Griffin.”

It's not hard to see why everyone has said yes to an idea that she thought might not be accepted.

Mary made so much of an impact on the girls varsity basketball team that she occupies a space wherever they go. They spread her jersey out on a chair just before every basketball game. When she's able, she sits with the team.

“The girls are crazy about her,” said CHS head girls basketball coach Omar Liggins, who is also an assistant on the football staff. “She's a heck of a basketball player. She gives it all she's got and brings an excitement to the gym whenever she walks in.

“We were in practice one day and she walked in. The girls stopped everything and ran to her. That's okay with me. She still brings a positive energy to the team, even though she's not out there on the floor. I'm really glad she's spreading her spirit around a little, and I'm looking forward to watching her lead us out.”

“The school has been so supportive from every aspect,” said Amy. “Anything she's needed, or wanted, they've done. Her teachers and staff couldn't have been more helpful.”

Despite extended absences that are a side effect of chemotherapy, Mary has managed to not only remain on grade level, but she's an honor roll student as well.

“My teachers help me. When I went to get chemo, after I got home I might be sick for a week. They've worked with me every step of the way.

“Most people my age don't want to go to school. Maybe it's because I have been too sick to go, but I love it. I look forward to school.”

“I'm going to try to play. It's going to be hard on my ankles, so I'm going to have to figure out how to run.”

While nobody is doubting her, others are more hesitant. The risk of breaking a hip is increased. Every reconstructive surgery takes that much more bone.

Whether or not she takes the court as a player again is a question to leave for later. Still, her determination shows through in all aspects of her life – even in her college plans.

“I'm going to Virginia Tech to become a veterinarian,” said Mary, who added that she has a preference to work with large animals. “People always phrase that question 'what do you want to be when you go to college.' I tell them what I'm going to be.”

FARMVILLE – Fuqua School's season that almost never was will begin this Friday. Two weeks after the Falcons were scheduled... read more