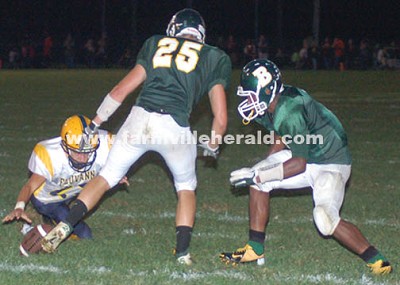 Knights Regroup, Pull Away From Flucos In Fourth Quarter

BUCKINGHAM – At first, it looked as if the Buckingham County High School football team was going to have an easy time in its home opener against Fluvanna on Friday night. The final score, a 56-26 Knights' victory would seem to back that up, but for three quarters, that was hardly the case.

Buckingham breezed out to a 14-0 lead on their non-district rivals, and all signs pointed to a route in what looks to be the final Battle for the Bridge for the foreseeable future, but two quick scores by Fluvanna (1-3) tied the game, and at halftime, Buckingham was clinging to a 21-20 lead.

“Fluvanna came to play,” said BCHS head coach Craig Gill. “We jumped out to a little lead on them, but they came back and had the momentum. We could've fallen apart in the second quarter, but we regrouped at halftime, and played well from there.”

“After being up and letting them back into the game I didn't see anyone pointing fingers or getting on anybody at halftime,” said Gill. “The kids were calm. [Tibbs] threw three passes that Ronnie Lott couldn't have covered. We made some adjustments and played a very solid game in the second half.”

With the two teams trading possessions, Buckingham was able to blow the game open with help from an old friend – the Power I.

“We call it “Knights Set”, said Gill. “The kids like it. They like the spread too, but we were getting bogged down in the spread. It was old-fashioned football.”

The move paid off. Kyree Koonce scored on a 35-yard touchdown run with 9:20 remaining, and an interception by senior Cam Johnson again gave them possession deep in Fluvanna territory. Kenneth Johnson capped off the short drive with a seven yard touchdown run to give BCHS a 42-20 lead.

Fluvanna scored with 2:55 left on a five-yard touchdown run by Tibbs, but Buckingham answered on its next play from scrimmage with a 55-yard touchdown run by Koonce. A recovered high snap gave BC possession on the 11-yard line, and the Knights capped their scoring on an 11-yard run up the gut by Kenneth Johnson.

“I'm really proud of the way the kids came together after halftime. They really showed heart. This was probably good for us. Now we can go into the district knowing we can face adversity.”

With almost machine-like precision, Buckingham needed a little under three-and-a-half minutes to complete a ten-play 58 yard drive that ended in a Koonce one-yard touchdown run.

After forcing a three-and-out, the Knights did it all over again, this time needing only five plays to score with 4:38 left on the first quarter clock. Kenneth Johnson finished off the drive with a one-yard run, and Koonce gave BC a 14-0 lead with a two-point conversion run.

Everything seemed to be going Buckingham's way. The Knights appeared to force another three-and-out, but a fake punt run gave Fluvanna a first down. The Flucos then used a long pass play to get into scoring position, and on the first play of the second quarter, scored on a seven-yard touchdown pass from Dashan Tibbs to Alec Turley.

The Flucos regained possession on the ensuing kickoff, after Buckingham failed to recover a high and short kick at the Knights' 30-yard line. Two plays later, Fluvanna erased the deficit on a seven yard touchdown run by Jovan Burton.

Buckingham pulled back ahead with 5:51 left in the half on a one-yard run by Johnson to take a 21-14 lead, but Fluvanna pulled back to within a point with 1:07 left in the second quarter on a five-yard slant pass from Tibbs to Jalen Harrison. A bad snap on the extra point attempt gave BCHS a slim one-point lead at the break.

Buckingham will enter district play on Friday night at Amelia.

“They've lost a lot from graduation, but you couldn't tell looking at the video. They're the best team we've faced all year. They're always tough at home, so I expect it to be a tough game.”

No Upset Victory For Eagles At Rustburg

There was no overlooking the Prince Edward County High School football team this year for the Rustburg High School Red... read more