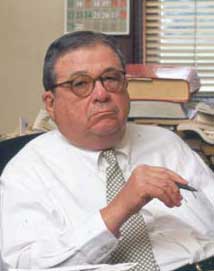 RICHMOND, Sept. 18 – John L. Brinkley, 75, of Richmond, formerly of Hampden-Sydney, passed away Friday, September 14, 2012. He was a resident of Westminster Canterbury Richmond. He was born August 9, 1937, the son of Charles Blane and Joyce Luster Brinkley of North Carolina.

In 1967 he returned to H-SC's Classics Department from which he retired as Professor. While at H-SC, besides teaching Greek, Latin, Classical Mythology, and Rhetoric, he served for many years as Clerk of the Faculty and College Historian. His definitive history of H-SC, On This Hill: A Narrative History of Hampden-Sydney College, 1774 to 1994, was published in 1994. “Brinks” was also for many years the faculty advisor of the Kappa Sigma fraternity and became an honorary Brother. During his 37 years of teaching, he kept things “lively” through conversation, addresses, and lectures. He had a sharp wit and boisterous laugh. He was also somewhat of an icon: wielding a cigar and cane; sitting on the sidelines at the 15th yard line of every home football game or behind home plate at every home baseball game; and ruling as resident scholar and historian from his office and fortress of books in Morton Hall. Also, Brinks was recognized with numerous accolades, including the Algernon Sydney Sullivan Medallion, the first Hubard Award, the first Crawley Award, and the Keating Medallion. In 2007 he was inducted into Hampden-Sydney College Athletic Hall of Fame. As can be seen, his life was dedicated to Hampden-Sydney College and to its students and graduates.

Mr. Brinkley is survived by a sister-in-law, Ruth Brinkley; and two nephews, Charles Blane Brinkley III and Samuel L. Brinkley, all of Washington State; several cousins and numerous friends. Finally, he leaves behind an extended family of hundreds of H-SC men whose lives he touched and on whom he had a profound impact and influence.

A Celebration of his life will be held at Hampden-Sydney College at 10 a.m. on November 10 before the HSC/RMC game. Details regarding this service can be obtained by contacting the Rev. David Keck whose e-mail address is dkeck@hsc.edu.

Memorial contributions in his memory may be made to the John L. Brinkley Endowment for the Classics, c/o Office of Institutional Advancement, P.O. Box 637, Hampden-Sydney, VA 23943 or on-line at