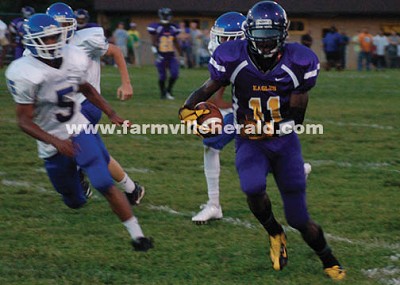 The game was far from pretty.

By the time Prince Edward quarterback Davon Adams connected with receiver Marquis Fitzgerald for the game winning touchdown with 30.3 seconds remaining, style was gone. However, pride managed to survive numerous penalties, cramps and fumbles that proved to be problematic for both teams throughout the game. In the end, pride may have been the only source of energy the two fatigued teams were drawing on.

“It's as close to a crosstown rival as either school can get,” said PECHS head coach James Ford. “These kids know each other. Many are related to one-another. They play pick-up games with one-another. When bragging rights are on the line, you see the kids dig extra deep and we saw that tonight.”

“It's tough to play your crosstown rival in the first game of the season,” said CHS head coach David Sullivan. “We'll play this game later in the schedule next year when Prince Edward comes into the district, and I think it will be better. But I think our guys found out something about themselves, even in the loss. We made mistakes, and there are things we're going to have to address, but a lack of effort isn't one of them.”

Prince Edward (1-1) led for most of the game, before Cumberland (0-1) was able to turn a big mistake by the Eagles into points.

A shanked punt from the back of the end zone gave CHS possession at the PE seven yard line early in the fourth quarter. Two plays later, Cumberland senior quarterback Bo Winbush gave the Dukes an 18-17 lead.

Due in big part to a hot day that turned into a muggy night, both teams struggled through a cramp-filled and mistake-marred fourth quarter.

With under four minutes remaining, PE fielded a Cumberland punt and returned it into CHS territory before fumbling and recovering the ball at the 35 yard line.

PE had to endure procedure penalties, missed opportunities and a fourt-and-seven conversion pass from Adams to Cleon Watkins just to get in position to score. With time running down, Adams found Fitzgerald, who had gotten a step on his defender, along the left sideline. His pass hit Fitzgerald in stride for the game-winning 23-yard touchdown.

“In our final time out, I told them that 'I want guys in there that will step up now,'” said Ford. “Marquis said 'all right, give me that ball,' and Davon looked at him and said 'I've got you.' That's pretty much how it went down.

“Marquis got a step on their best cover corner, and Davon put the ball in a place where only our guy could make the catch.”

Had Prince Edward not been able to convert on the touchdown, Ford said that he would've had no problem going to senior place kicker Bobby Burke, who set a school record with a 38-yard field goal in the first quarter.

“We now know that if we can get inside the 20 or 25, we can put points on the board,” said Ford. “That's exciting for us, and it definitely changes how we approach things. If we hadn't been able to score the touchdown, we would've attempted to win the game with a field goal.”

Prince Edward jumped out to a 10-0 lead in the first quarter. Adams hit Fitzgerald on a bubble screen and after evading several CHS tackles, turned the short pass into a 56-yard touchdown at the 6:26 mark.

Burke capped the Eagles' next drive with the 38-yard field goal with 1:04 left in the quarter. Cumberland took advantage of a sizeable return on the ensuing kickoff.

CHS tailback TJ Ford pulled the Dukes to within four points on a 20-yard touchdown run just 10 seconds into the second quarter.

Cumberland took its first lead with 3:18 remaining in the half. Ford scored his second touchdown of the night on a 22-yard run around the left end.

Just before the half, Javon Jackson put the Eagles back in front with a four-yard touchdown run up the middle with just 29.6 seconds remaining in the half.

The two teams traded possession for much of the third quarter. Both squads were able to move the ball between the 20s, but their respective drives either stalled, our were ended by turnovers.

Prince Edward took possession on its own 10-yard line late in the third quarter, but was driven backwards to the one-yard-line, which led to the shanked punt and Cumberland's final score.

“I really thought about it,” said Ford when asked his thoughts about taking a safety at that point of the game. “Up until we scored at the end, I was really wishing I had that one back.”

Cumberland was led on the ground by Ford, who had 90 yards and two touchdowns on 10 rushes. Winbush had six carries for 32 yards. He was 1-3 passing for six yards.

Adams was 13-18 passing for 202 yards. Fitzgerald had six catches for 150 yards and two touchdowns. Devonta Richardson had two catches for 35 yards and Watkins had three receptions for 21 yards.

Eddins led the Eagles on the ground with nine carries for 38 yards and a touchdown, while Adams had six carries for 34 yards.

Cumberland will host Appomattox at 7 p.m. on Friday night in the home opener for the Dukes, while Prince Edward will host Buckingham at 7:30 p.m. Appomattox (0-2) lost to Nottoway 35-20 last week, while Buckingham (1-0), which defeated Appomattox 34-7 on the opening week of the season, was idle.

Knights Cruise To Win Over Appomattox

APPOMATTOX – The questions about how the Buckingham County High School football team would fare after the graduation of veteran... read more