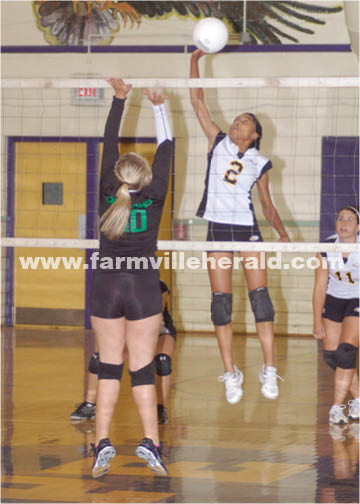 The Eagles, who rallied to win the first set, were unable to sustain any momentum in the second and third as Park View dominated in every facet.

“They may have the simplest approach of any team we've played so far this year,” said PECHS head coach Bruce Bogese. “But they consistently went after every ball, and were constantly attacking and forcing us to scramble. If they play the rest of the year like they did tonight, they have a good shot at winning this district.”

Prince Edward, on the other hand, will need to quickly put Tuesday's performance behind them if the Eagles have hopes of climbing back into the race that will include three trips through the Southside District schedule and no district tournament.

“We will have to improve on our passing. We spend a good majority of time in practice on our passing,” said Bogese. ” But if anyone were to look at this game tonight, you wouldn't come away with that impression.”

Prince Edward shook things up in the fourth set. Park View worked out to a comfortable lead, before PE closed a 19-12 deficit to 19-17.

A call from the chair umpire on a return from PE in the Park View backcourt was ruled out that erased all of the momentum gained by the Lady Eagles. They were noticeably unable to shake the call as Park View scored the final six points to close out the match.

“Whether it was in or whether it was out, we need to not have a call effect how we play the next point, or especially the points after that,” said Bogese. “I thought we played better in that fourth set. We were flat, so I put in the six girls that had scored the best nights up to that point. They weren't playing in their normal positions, but they went after loose balls and put in the effort to climb back into the game. Sometimes, you have to let the biggest hearts play.”

Prince Edward was scheduled to travel to Cumberland on Thursday night and will travel to Brunswick on Tuesday, before returning home to face Greensville next Thursday.

AMELIA – Given their overall youth and inexperience, the Buckingham County High School volleyball team knew that the 2012 campaign... read more