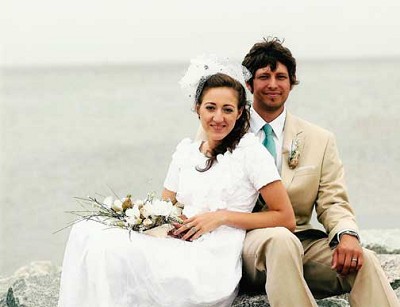 The Rev. Ken Hash officiated at the double-ring ceremony.

Miss Barbara Ranck, of Parkesburg, PA, served as her sister's maid of honor. Bridesmaids were Miss Ashley Zook, sister of the groom, of Pamplin, and Miss Elizabeth Ranck, Miss Martha Ranck, and Miss Catherine Ranck, sisters of the bride, of Parkesburg, PA.

Joshua Zook, of Pamplin, was his brother's best man. Groomsmen were Daniel Ranck, brother of the bride, of Parkseburg, PA; Tyler Stoltzfus, cousin of the groom, of Prospect; Daniel Petersheim, of Farmville; and Stickland Warfel, of Arizona. Ring bearer was Carter Ranck, nephew of the bride, of Pennsylvania.

Program attendants were Derek and Logan Stoltzfus, cousins of the groom, of Prospect.

After a wedding trip to Sarasota, FL, the couple now resides in Prospect.

The bride, a 2005 home school graduate, is the owner of Sparkle and Shine Cleaning Service.

The groom, grandson of Curties and Fern Yoder, of Prospect, is a 2006 home school graduate. He received a Certificate in Biblical Studies from Rosedale Bible College, Irwin, OH, in 2008 and an Associate Degree in Biblical Studies with concentration in Youth Ministries from Rosedale Bible College in 2009. In 2011 he received a Bachelor of Science degree in Religion: Youth Ministries from Liberty University, Lynchburg. He is a full time student at Liberty Baptist Theological Seminary and Graduate School, Lynchburg, currently pursuing a Master of Arts in Religion with Discipleship Ministries concentration. He is employed as a farrier and horse trainer and works in the family business.